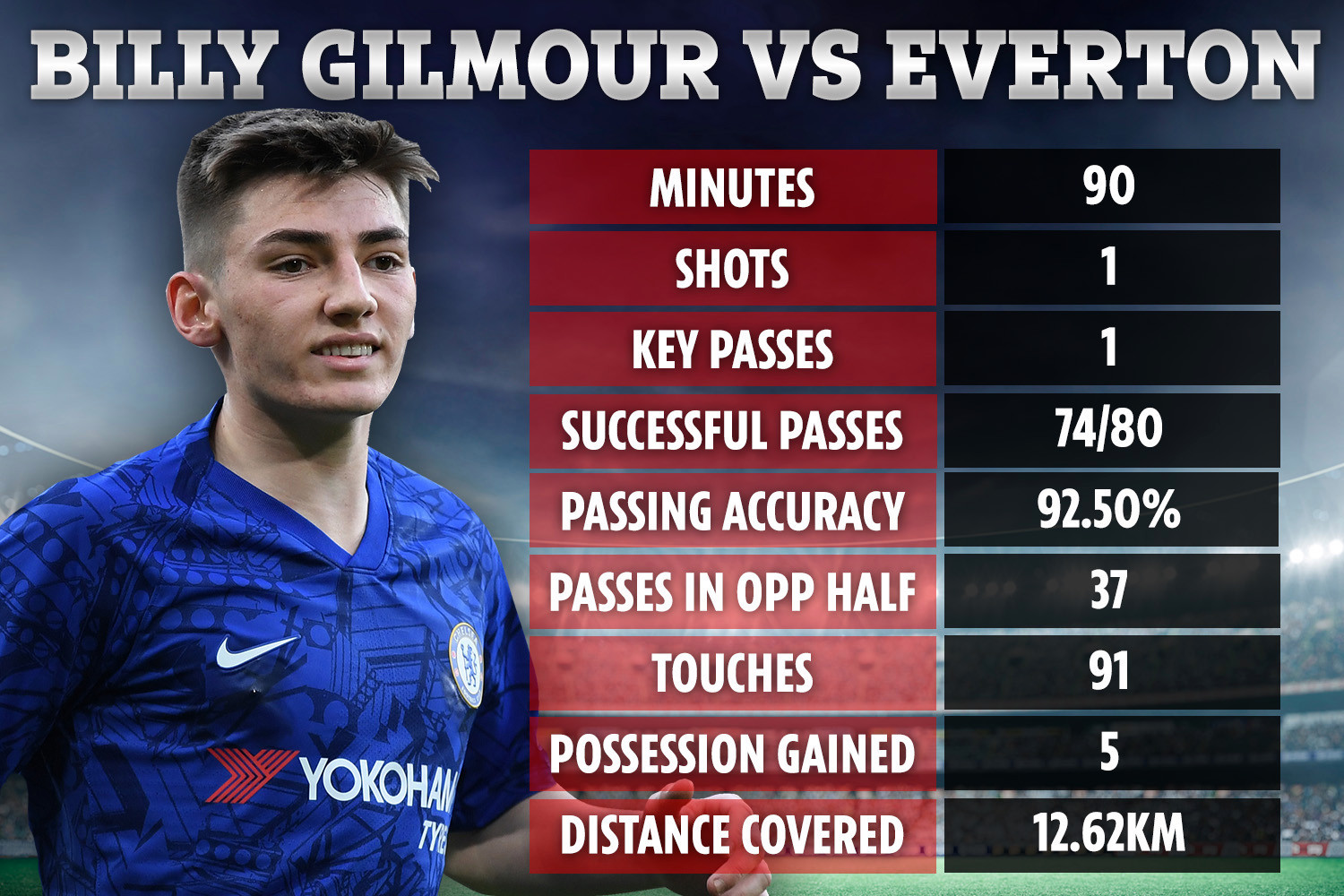 BILLY GILMOUR’S incredible stats from the Everton win prove why he was a worthy winner of the man-of-the-match award.

The Scottish teenager picked up the gong for the second game in a row, backing up his dominant display against Liverpool with a midfield masterclass against the Toffees on his full Premier League debut.

Starting as the deep-lying midfield between Ross Barkley and Mason Mount, Gilmour was the man who got things ticking for Chelsea in the role Jorginho has made his own since arriving in 2018.

He was constantly demanding the ball and when he got hold of it, would always be looking forward to create just as he did in the build-up to Pedro’s goal.

No other player on the pitch managed as many passes, nor could anyone match his 12.62km covered during the 4-0 rout.

But it was not just going forward that he impressed. Gilmour regained possession five times, including some vital interceptions and strong challenges.

However, after Reece James’ introduction on the hour mark, the Scottish sensation proved he is just as capable in a more advanced midfield role as he is at the base of the three.

Gilmour may only be 18 – and not 19 until June – but he already has a mature head on his shoulders and Frank Lampard was again delighted with his game.

The Blues boss said: “Billy is receiving the ball in difficult areas of the pitch where if you don’t move it quickly, firstly you don’t get rhythm in our play and secondly if you give it away in those areas, it’s dangerous.

“You need… I was going to say I rude word then! You need confidence. [Laughing] Balls, yes that word! Jorginho has it and Billy has it.

“One of the most pleasing things with Billy today for me was that he showed those balls in the first half and then stepped up as one of the higher midfield players and instantly took it on board, played balls higher up the pitch and got into the box.

Proud moment to make my full Premier League debut this afternoon! Another big win and a great team performance at the Bridge! #COYB

“He showed he can do both. That is great for me when I’m thinking about how the midfield works.”

Jorginho is suspended for the games against Aston Villa and Bayern Munich, paving the way for Gilmour to retain his place in the side.

But even when the Italian is fit again, there is certainly no guarantee he will walk back into the starting XI.