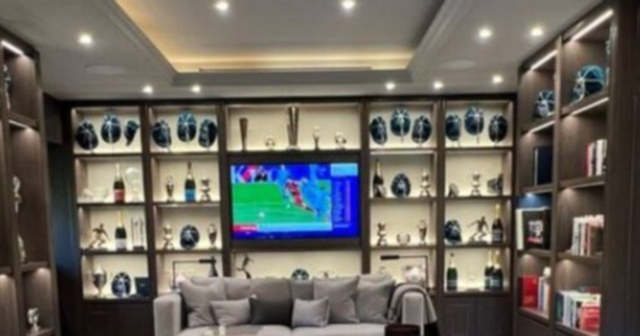 CHELSEA legend John Terry has shared a glimpse of his packed trophy cabinet on Instagram… one most CLUBS can only dream of.

The former England captain won a staggering 15 major honours during his glittering playing career – plus dozens of individual titles.

Terry posted a snap of his trophy cabinet to his Insta story on Monday morning – and it truly is a sight to behold.

The shelves were littered with England caps and bottles of champagne, which used to be the Premier League’s Man of the Match prize.

These include two copies of the Alan Hardaker Trophy, a prize awarded to the Man of the Match in a League Cup final.

What’s most staggering about Terry’s trophy cabinet is the lack of medals, suggesting there are plenty more honours dotted around his home.

He was also named PFA Players’ Player of the Year in 2005 and included in Fifa’s World XI for FIVE consecutive years.

And Terry played more than 800 professional games for Chelsea, England, Nottingham Forest and Aston Villa – a staggering amount for any player.

The 78-cap international has moved into coaching since retiring in 2018, becoming Villa’s assistant manager in October of that year.

Terry helped the Birmingham club achieve promotion to the Prem in 2019 before leaving in July in a bid to become a manager.

He was recently linked with the vacant job at former club Forest before they appointed ex-Swansea boss Steve Cooper.