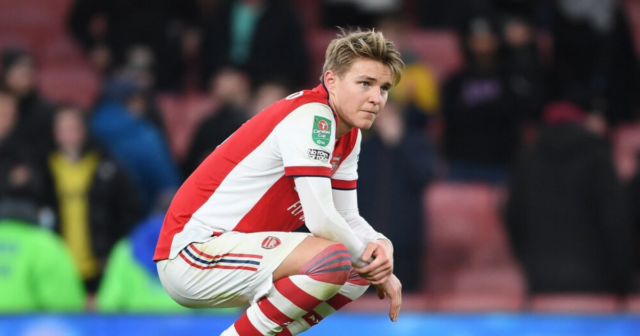 ARSENAL host Burnley today in the Premier League as they look to continue their push for a Champions League spot.

The Gunners have not played a Premier League fixture since New Year’s Day after controversially cancelling their game at Tottenham last weekend.

But they had a disappointing return to action on Thursday, when they were beaten 2-0 at home by Liverpool in the Carabao Cup semi-final.

Visitors Burnley meanwhile are embroiled in a struggle against relegation and have been at the centre of cancellation controversy themselves.

The Clarets have only played 17 Premier League matches so far and have had games against Leicester and Watford postponed in the past week.

What time does Arsenal vs Burnley kick off?

What TV channel is Arsenal vs Burnley on and can I live stream it?

Thomas Partey will miss this game for Arsenal after being sent off against Liverpool, infuriating Mikel Arteta.

Heart exams have revealed Pierre-Emerick Aubameyang is “completely healthy”, but he may still be out of favour with Arteta after being stripped of the captaincy last month.

Calum Chambers, Cedric Soares and Bernd Leno are all out.

It remains to be seen how Burnley will recover from their Covid crisis.

Conor Roberts and Ashley Barnes are both injured while Maxwel Cornet is at AFCON with Ivory Coast.

Did you miss our previous article…
https://www.sportingexcitement.com/football/premier-league/pep-guardiola-to-be-offered-holland-job-as-nation-tempt-boss-to-leave-man-city-when-deal-expires-after-next-season