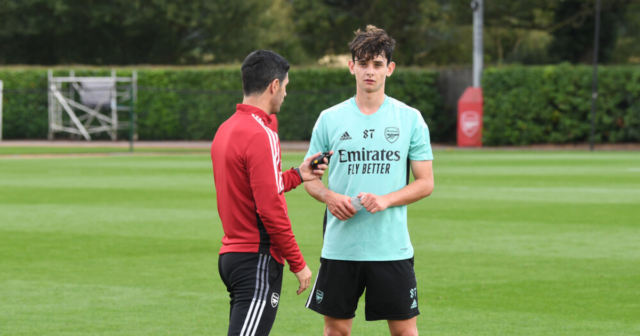 ARSENAL continue in their Carabao Cup quest this week with a fourth-round tie against Leeds.

Gunners fans may hope to get a first glimpse of teenage wonderkid Charlie Patino in the clash as the side hope to book their place in the quarter-final draw.

The midfielder,18, was ‘close’ to a place in the matchday squad in the last round, and could feature this time out.

Arteta explained at the time: “He was very close, but we decided as well that some players needed minutes and it will happen naturally in time.”

When is Arsenal vs Leeds?

What TV channel and live stream is Arsenal vs Leeds on?

The Gunners will still be without Granit Xhaka as the Swiss continues to rehabilitate from a knee injury – while Kieran Tierney is missing with a bruised left ankle.

Bernd Leno will be thrown back in between the sticks, having lost his place in the Premier League to Aaron Ramsdale.

Cedric Soares could replace Takehiro Tomiyasu at right-back, while Nuno Tavares can continue to deputise for Tierney.

Ben White and Gabriel are likely to be given the night off – with Rob Holding and Pablo Mari candidates to return to the side.

Albert Sambi Lokonga started against Aston Villa and could be given another chance to shine against Leeds as he grows into this Arsenal side.

How Arsenal could line up vs Leeds

Odds for after 90 minutes

Did you miss our previous article…
https://www.sportingexcitement.com/football/premier-league/conte-tells-man-utd-hes-ready-to-accept-job-after-intense-contact-but-club-still-to-make-decision-on-solskjaer