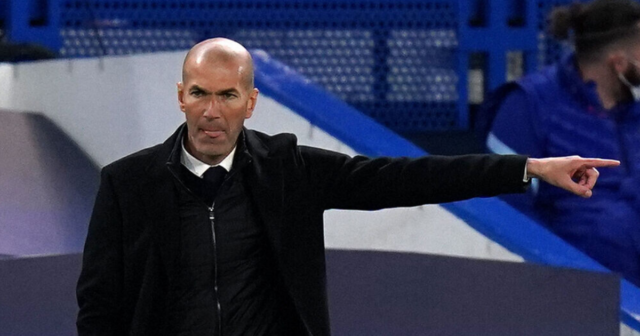 ZINEDINE Zidane is a candidate to take over from under-fire Ole Gunnar Solskjaer at Manchester United.

And Zizou’s former team-mate Geremi has predicted the Frenchman to succeed at Old Trafford were he to take charge.

Zidane is one of a four man shortlist drawn up by Old Trafford chiefsGeremi had spells in the Premier League with Middlesbrough, Chelsea and Newcastle after spending time at Real Madrid

SunSport exclusively revealed a leading agent has been instructed to contact some of the biggest names in the game, with Zidane shortlisted alongside Brendan Rodgers, Erik Ten Hag shortlisted and Antonio Conte.

And Geremi, speaking exclusively to Ladbrokes at its launch of the 5-A-Side Bet on Newcastle v Chelsea said on Zidane: “Could he become Manchester United’s manager? Based on his ability to surprise us already, I would say wait and see.

“At that level, with the performances that he demands, I don’t think there’s a team in world football that Zinedine couldn’t manage.

“To manage a big club, you need a person with a big personality. Someone like Zinedine, a former player at the top level, can speak to his players and relate to them. He can speak to them without fear.

“It would be so easy for younger players in a team to receive a message from someone of Zidane’s stature.

“I think he’d be a success at Manchester United. He has a great record and I think it’s a challenge he’d like.

“The only thing is that he’s the kind of person who’d want to take over a club at the beginning of a season.

“The Premier League is a new world for him; I don’t think he’d take that risk in the middle of the season.

“I think he’d wait until the end of the season and construct his own team in pre-season.”

Geremi played for Real Madrid between 1999 and 2003, winning La Liga and the Champions League twice – playing alongside Zidane for two years.

And Zizou has continued his success as a player since going into management in 2016.

But he left the Bernabeu at the end of last season to take a break from the game.

It means the Frenchman has no desire to move to Old Trafford and will not rush back into management any time soon, reports suggest.

Instead Antonio Conte is the bookies favourite to take the reigns at Manchester United.