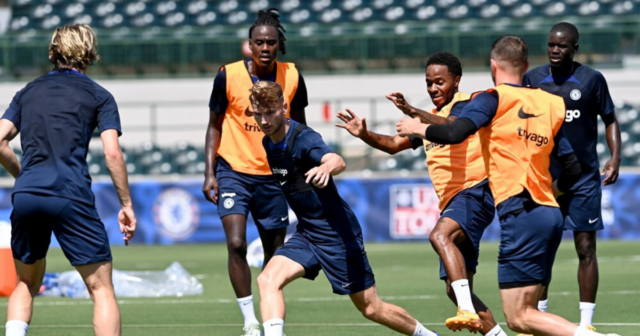 TIMO WERNER has given the biggest hint yet that his future lies away from Chelsea after refusing to confirm he will be staying.

The striker, 26, scored in the Blues’ 2-1 victory over Club America in Las Vegas in the early hours of Sunday.

But Werner is one of several stars far from settled in Thomas Tuchel’s squad.

There is a sense of deja vu this summer with Raheem Sterling a £50m arrival from Manchester City, which saw Tuchel looking elsewhere rather than putting faith in Werner.

And with three years left on his contract after joining from RB Leipzig for £48m in the summer of 2020, Werner is as close as ever to considering life away from Stamford Bridge.

The 53-cap German travelled to Orlando on Sunday ahead of games against Charlotte and Arsenal this week.

Asked whether he thinks he can be happy at Chelsea next season, he said bluntly: “I could be happy everywhere.

“The most important thing is that I am happy. I am happy when I play and score goals. That’s the fact. That’s what I should take care of and other things will come.”

Werner revealed he has not spoken with Tuchel about his situation, adding: “The manager always has different ideas, different thoughts and what you need in different games.

“In many games I was not in his thoughts so I try to change that. It is not different to last season, it was the same when Romelu came. We had big, big competition. It’s still the same.

“At a big club like Chelsea you have that competition. In pre-season you can show that you want to play, that you are a guy who wants to be in the starting XI. That’s what I try.”

After their latest win, when quizzed about Werner’s future, Tuchel said: “We need to see, but everybody is responsible for their own situation.

“Timo played 45 minutes like everybody else and scored, and from there we go.”

One barrier potentially putting off suitors ending Werner’s limbo at Chelsea are his wages of £270,000 a week.

A significant reduction is needed to tempt any bid.

It is something which must happen if he is to be picked by Germany for this winter’s World Cup.

Werner said: “It is clear I want to play more and I should play more to be in good shape for the World Cup — and also to have a chance to play.”

Meanwhile, Sterling and Kalidou Koulibaly — a £35m capture from Napoli — could make their club debuts against Charlotte early Thursday.

Advertisement. Scroll to continue reading.
In this article:clubamerica, earlyhours, isone