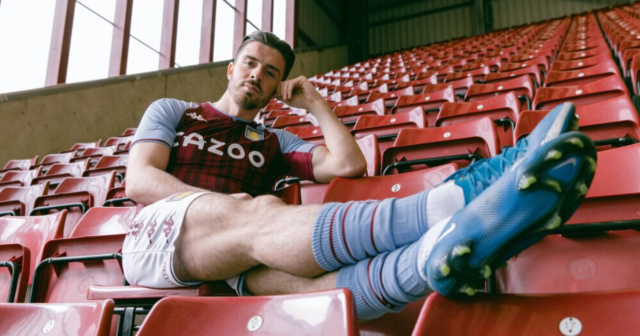 And it has left many of them feeling rather excited about Villa’s chances of keeping their iconic skipper out of Manchester City’s clutches.

Pessimistic Villa fans feared they would never see Grealish in their club’s colours again when he headed off for England duty, amid rumours Pep Guardiola was preparing to launch a £100million bid after the Euros.

However Grealish surprised and delighted his Villa fanbase when he was pictured wearing the club’s new 2021-22 Kappa kit when it was launched yesterday.

The club’s poster-boy was shown in snaps with his feet up at Villa Park modelling the new look, while declaring his love for his hometown club in a promotional video.

“Everyone knows what claret and blue means to me,” commented the England midfielder.

“I’ve been a Villa boy all my life, and I love playing for this club.”

That was enough to convince fans the only walking Jack will be doing this summer is on the catwalk!

The Villa faithful took to social media, with one fan commenting: “No way they’d promote him this much if he’s off. Never in doubt.”

While another believer added: “So, Jack’s staying then. Knew it all along.”

Unfortunately for Grealish’s army of Villa fans, the snaps of their hero were taken several weeks ago, before the midfielder joined up with Gareth Southgate’s Three Lions.

In fact City fans remain convinced they are on course to increase the amount of Sky Blue Grealish will be sporting this term.

City also released their new home kit yesterday with many commenting that they expect to see it being worn by the Villa skipper by the time the new season kicks off.

One Tweeted: “Classic kit! @JackGrealish you’ll look good in this one.”