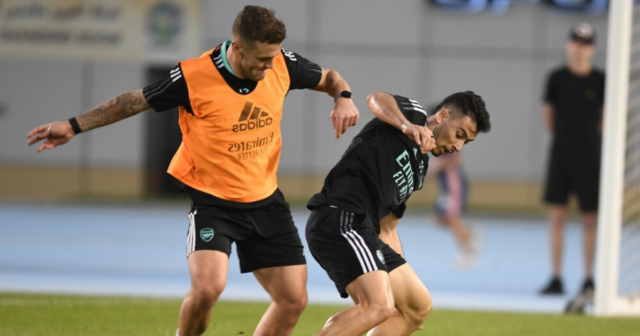 JACK WILSHERE has praised Mikel Arteta for his ‘genius’ management of Gabriel Martinelli.

The former Arsenal midfielder has also said that he believes Martinelli will become a ‘top player’.

Wilshere believes that Martinelli can become a ‘top player’

In an interview with Arsenal Media, Wilshere discussed the potential of the Gunners’ young stars including Emile Smith Rowe and Bukayo Saka.

He said: “I think you’ve just got to look at the level that they are setting.

“The consistency that they’re putting in every week, their performances and they’ve got a manager as well who trusts them and I think if you’re a young player at Arsenal coming through the academy now, you should look at that and think, ‘Well, if I’m good enough, I’m going to get a chance, no matter how old I am.’

“Yes, you’ve got to work hard and prove yourself, but with a manager who believes in youth and wants to build a young, hungry team, so they’ve all got a chance.

“I mentioned before their consistency levels which is sometimes rare for a young player, a lot of time you see a young player come in, have a good game, three or four good games, maybe one or two bad games, but with Emile and Saka, it seems to be they’re doing it week in, week out.

“They’re making the right decisions all the time.”

Wilshere also discussed his love for Martinelli and how he believes that the Brazilian can become a top player in world football.

He added: “The one who I really like and think he’s going to be top, is Martinelli.

“I think what the manager has done with him has been genius as well.

“When I first went there he was training, coming on, not playing much, but training really well and I was thinking, ‘He’s going to get a chance here’ and he eventually got his chance and he’s been brilliant.”

Martinelli joined the Gunners from Ituano in 2019 for a fee of around £6million.

Despite facing various injury-related issues throughout his time at the club he has been a stand-out player and a key asset for Arteta.

The 20-year-old has made 21 appearances so far this season and registered seven goal contributions.

He recently admitted that it is his goal to wear the number 14 shirt for the Gunners.

The number was made famous by Arsenal icon Thierry Henry and has most recently been held by Pierre-Emerick Aubameyang.

However, Aubameyang recently joined Barcelona on a permanent transfer so the number 14 has become available.