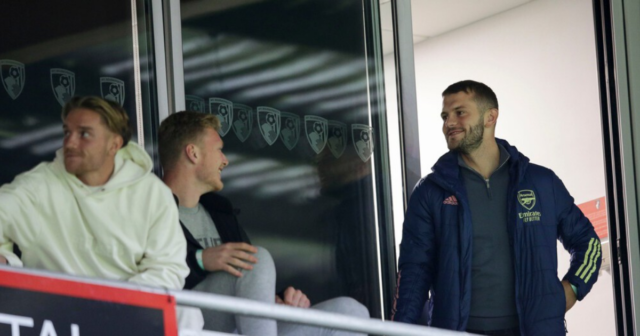 JACK WILSHERE was spotted in an Arsenal coat as he and Aaron Ramsdale watched the Gunners’ Under-23s against Bournemouth.

The former Arsenal star has been a free agent since leaving the Cherries at the end of last season and headed back to his old club to watch the youth teams.

New Gunners No 1 Ramsdale also played for both clubs having spent three years with the Cherries between 2017 and 2020.

And the two men were both in attendance at the Vitality to watch the 1-1 draw in the Premier League cup on Wednesday night.

Ex-England midfielder Wilshere was offered the chance to train with the Gunners by boss Mikel Arteta last month.

He has spent time in Italy this summer training at Serie B side Como in order to build up his fitness.

But due to the minnows being unable to register players from outside the European Union, Wilshere was not able to be signed by the Italian outfit.

When quizzed about whether the ex-England international could train with them, Arteta said: “He’s someone that I know, that I shared a dressing room with.

Wilshere, who was released by Bournemouth after spending the second half of last season in the Championship, told the ITV Football Football Show: “Listen, you never know.

Former Gunner David Hillier, 51, said on the Highbury Squad Podcast: “I have got inside information on this.

“I am a lucky man, so I am actually playing golf on Friday with a guy who does all his security systems at his house and he is very friendly with him.

“He was telling me about him. They are good friends, anyway, from back in the day.

“He said to me that he is just training at the club to try to get another club. There’s no offer of pay-as-play. He hasn’t even spoken to anyone at the club.

“He is happy to take a Championship club and just get back into football. He just wants to play. He wants to get fit.”

Wilshere was Arsenal’s youngest ever debutant at 16.

But after his breakthrough under Arsene Wenger he was unfortunately ravaged by injury.

He enjoyed a loan spell at Bournemouth during the 2016-17 campaign and went on to feature 40 times for the North London side the next season.

However, Unai Emery’s arrival signalled the end of his time at the Emirates and he departed for West Ham in 2018 but was allowed to leave the Hammers a year ago after playing 16 times in the top-flight for them.

He was most recently linked with a move to Newcastle… in Australia.