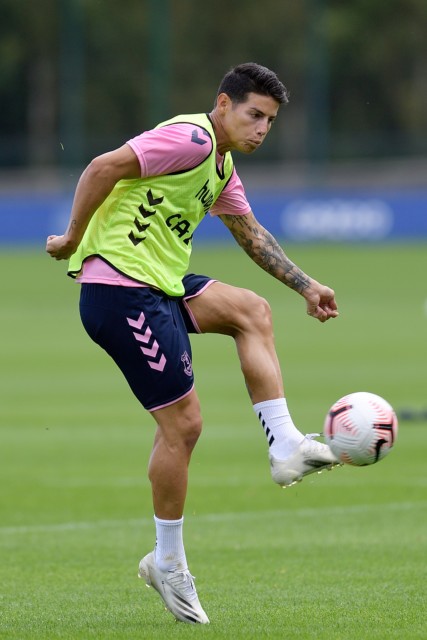 JAMES RODRIGUEZ is reportedly in the Middle East for talks to end his Everton hell.

The Colombian playmaker has been frozen at Goodison Park and searching for a way out.

The Times’ Paul Joyce reported that the 30-year-old will have talks with an unnamed club in Qatar.

Rodriguez couldn’t get a move elsewhere in Europe done before the transfer deadline last month, partly due to his mega £200k-a-week wages.

But the Qatari transfer winder is open for 10 more days.

Daily Mail report that Rodriguez flew out of Manchester on Saturday – around the same time the Toffees lost 3-0 at Aston Villa.

He hasn’t played a single game this season having been told by new manager Rafa Benitez he’s not in first-team plans.

But he was plagued by injuries and played just five times after February – scoring only once.

The disillusioned star recently made an alarming admission when he revealed he wasn’t even sure who Everton were playing.

Speaking on Twitch last month, he said: “I will start training on Monday, I think.

“On the weekend I will not play, I don’t even know who Everton is playing, can you please tell me?

“I think it is away because the past was here at home.

He later added: “Ah, against Leeds they play, away from home, against (Marcelo) Bielsa, a difficult game, let’s see what happens, hopefully they win.

“I have faith that this season will be good for me, big things are coming for me.

“Between now and August 30, anything can happen, I don’t know where I’ll play, I’ll be where things go well.”