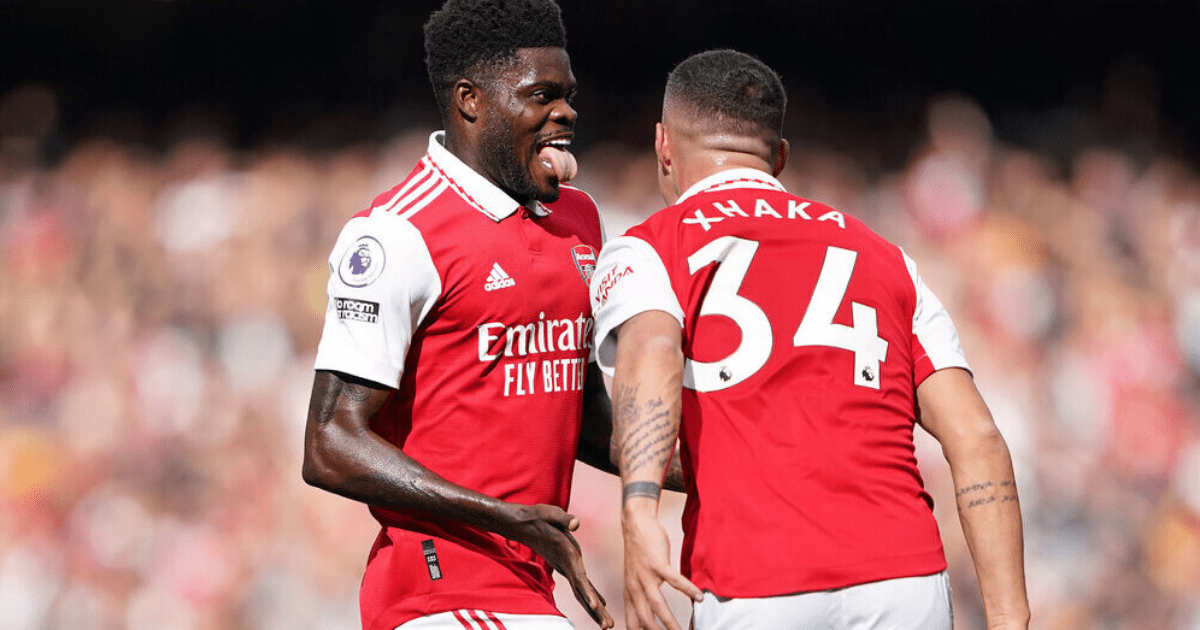 ARSENAL kept their place at the top of the Premier League with a dominant 3-1 win over rivals Tottenham at the Emirates.

The Gunners needed a result to keep their place at the top come the end of the weekend.

Partey opened the scoring with a peach

Jesus continued his fine form in front of goal 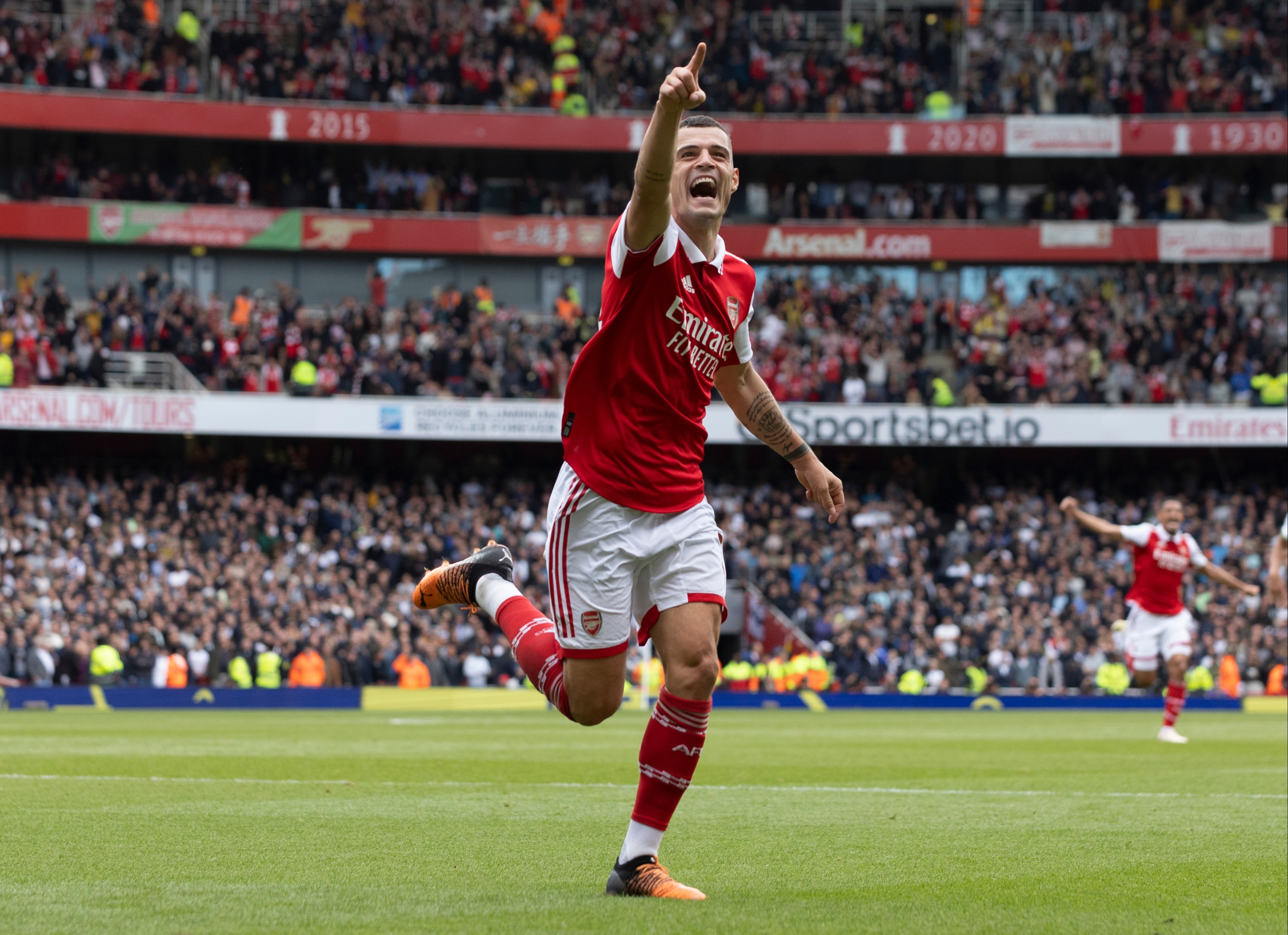 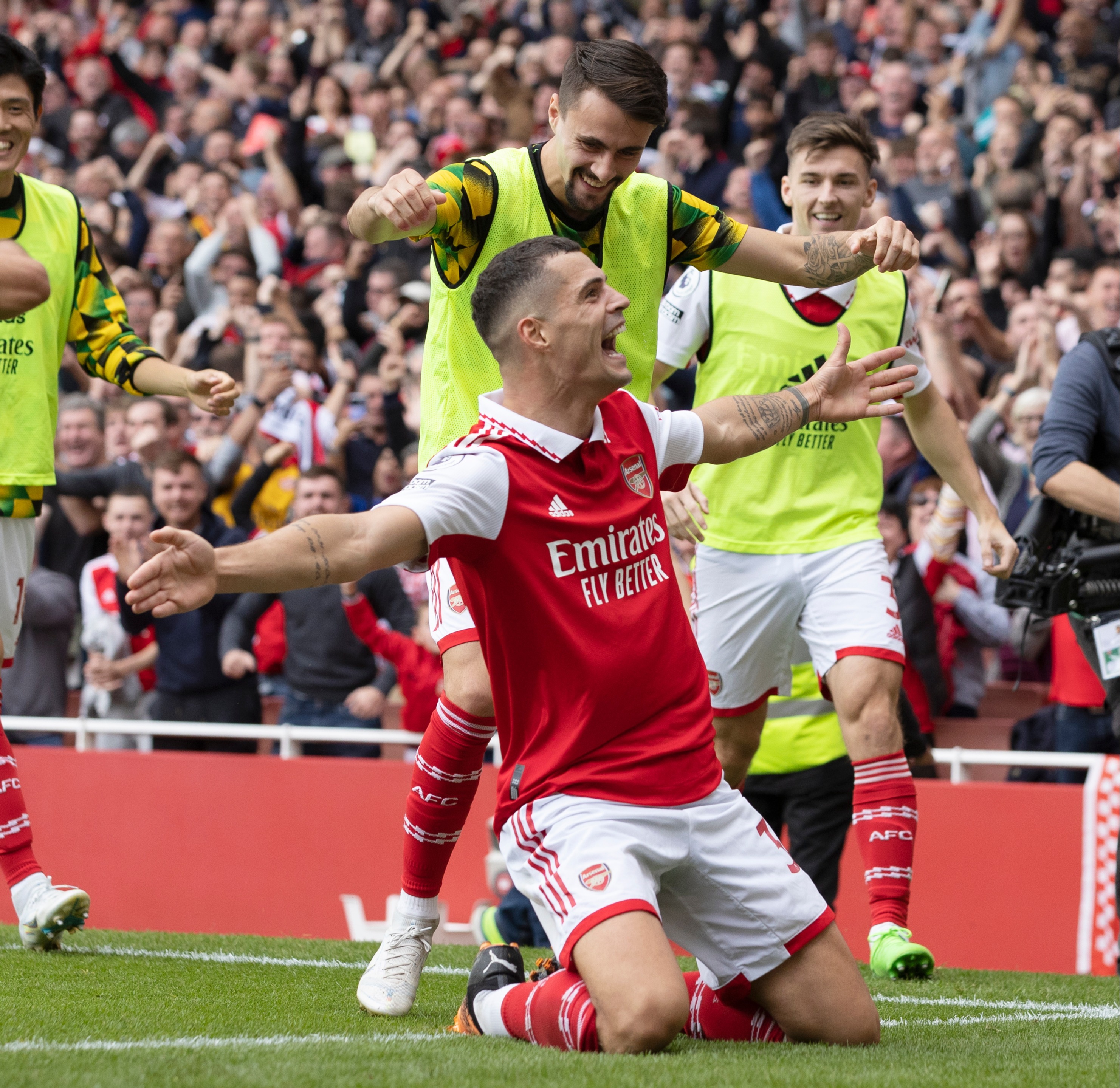 The Gunners remain top of the Prem

Thomas Partey opened the scoring with an astonishing long-range effort, rewarding Arsenal for their early pressure.

And the Gunners restored their lead with Gabriel Jesus tapping home following a parry by Spurs captain Hugo Lloris.

Arsenal then grabbed a third through fan favourite Granit Xhaka.

The Swiss midfielders redemption story at the Emirates continues.

Spurs’ away end was emptied at the sight of Arsenal’s third, and the Gunners announced themselves as unlikely rivals to Manchester City‘s Premier League crown with a big derby win.

Wasn’t called into action much with most of the football being played in the opposite half.

Could do nothing about Harry Kane’s equaliser from the penalty spot.

Played a peach of a pass out wide to Gabriel Martinelli to keep the pressure on Spurs in the early stages of the match.

Was unlucky not to be called up to Gareth Southgate’s England squad for September’s fixtures.

And again showed he’s a solid option ahead of the 2022 Qatar World Cup.

Solid in a tackle and composed on the ball.

Picked up an assist for Thomas Partey’s opener.

Also playing a right-back and not in his natural position at centre-back.

The Frenchman continued to cement his place in Arsenal’s starting line-up.

Was quick to sniff out any danger – especially with balls in behind the backline.

Gave away the penalty for Kane’s equaliser.

But apart from that, it was another solid display from the Brazil centre-back.

Arteta will be encouraged by his form alongside Saliba.

A relatively quiet afternoon for the left-back.

He was clearly instructed not to get too far forward out of fear of being caught on the break.

Linked up well with Martinelli at times.

No Thomas, no Partey.

What a goal from the Arsenal midfielder to open the scoring.

He opened up his body and curled his effort into the top right corner to send the Emirates into pandemonium.

Defensively sound and accurate in possession.

The Swiss hard man is just the type of player you need in these kind of games.

He didn’t give his Spurs counterparts a moments peace in the middle of the park.

Was rewarded with a goal in the second half to make it 3-1.

Granit Xhaka’s redemption story with the Arsenal faithful is one that will go down in history.

The 21-year-old was a thorn in Germany’s side for England on Monday.

And he continued tormenting his opposition on Saturday.

Every time he got on the ball, he had Ivan Perisic and/or Clement Lenglet desperately backtracking.

Doesn’t give the opposition a moments peace – exactly how it should be when playing on the wing.

His shot played a role in Gabriel Jesus’ early second half strike.

Before he even got his foot on the ball, he knew EXACTLY where he wanted it to go.

Creative in the final third, always looking to play team-mates in on goal.

Sent out to be a nuisance and he did just that.

Quick and inventive when he needed to be and got an assist as a result.

Been a breath of fresh air since joining from Manchester City in the summer.

The Brazilian is important to building Arsenal’s attacks and is more than comfortable playing with his back to goal.

Got his goal early on in the second half, tapping home from close range after Hugo Lloris parried the initial effort.

Brought on after Xhaka’s third. Kept it tight to see out the result.

The game was already put to bed before his arrival.

The Scotland international showed some good touches down the left flank.

The Portugal star got his first taste of a North London Derby.

There was no pressure on him with the result already in the bag.

The young striker was given a short cameo to impress.

Not much action in the final stages of the game.