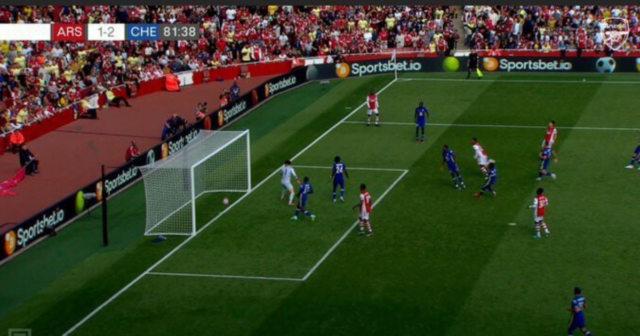 ARSENAL star Joe Willock was robbed of a late equaliser against Chelsea this afternoon, when officials failed to spot that his shot crossed the line.

The Gunners were trailing their London rivals 2-1 with ten minutes to go.

Willock, who impressed at Newcastle United last season, came on to try and turn the game in his side’s favour.

And he thought he had done just that, when his shot bounced off the crossbar and over the line in the 81st minute.

But with no goal line technology or VAR in use for this friendly game, Willock was forced to play on in disbelief that the officials had missed it.

Fans flocked to social media, labelling this decision as ‘disgraceful’.

And the Gunners went on to lose the game 2-1.

Arsenal’s bad afternoon was compounded when Thomas Partey was forced off with an ankle injury following a robust challenge by Ruben Loftus-Cheek.

The Ghanaian’s replacement Granit Xhaka did manage to level in the 67th minute, towering above Danny Drinkwater to head home.

But Mikel Arteta’s side were level for just five minutes, before a terrible Hector Bellerin pass gifted Tammy Abraham what would go on to be the winner.

Willock was then cruelly denied, before Chelsea saw out a confidence boosting pre-season win.

The Blues next face Tottenham on Wednesday night at Stamford Bridge, while Arsenal also face Nuno Espirito Santo’s side next Sunday in N17.