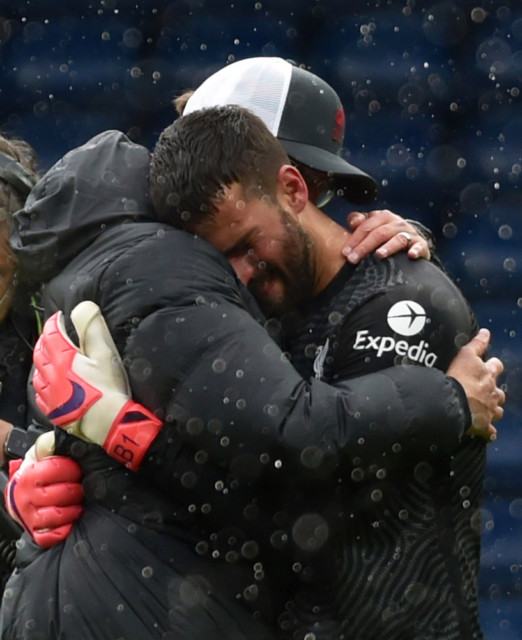 The Reds were on the brink of a damaging draw in their push for a Champions League spot when their No1 ventured forward for a 95-minute corner.

What followed was scarcely believable as Alisson leapt highest to meet Trent Alexander-Arnold’s in-swinger and fire a perfect header across Baggies keeper Sam Johnstone into the back of the net.

And a bewildered Klopp claimed the effort was of the highest calibre – and not just for a goalkeeper.

The German said: “We have seen it 10 times back in the dressing room and it’s absolutely incredible – what a goal, what a ‘worldie’.

“The technique was absolutely insane. It was just perfect.

“If Olivier Giroud has scored that we would be saying it was a world class goal so for this goal we have to say the same.

“We haven’t had a lot of moments like that this season so we have to savour them when they come along.

“I would love to say we see him do this in training four times a week but unfortunately that’s not the case.”

Here it is… Alisson's remarkable header deep into injury-time that handed Liverpool an incredible 2-1 victory over West Brom!

A tearful Alisson dedicated the goal to his late father, Jose Agostinho, who tragically drowned, aged 57, on the family ranch in Brazil earlier this year.

He said: “I’m too emotional, with everything that’s happened in my life recently with my family.

“Football is my life, from since I remember with my father.

“I hope he was there watching and celebrating. That was for my family and for the boys.

“You can’t explain a lot of things in life, the only answer for me is God, he put his hand on my head today and allowed this to happen.

“You can’t explain those kind of things – they just happen in football.”

The 2-1 victory at the Hawthorns leaves Liverpool one point behind fourth-placed Chelsea and three behind Leicester in third.

But with their two rivals still to play each other, the Red know if they win their final two games against Burnley and Crystal Palace, then they are in.

Alisson added: “I saw the ball coming and tried to run into a good position, maybe bring a defender with me to help one of the other boys, but no one came, and I was lucky and blessed to score.

“The Champions League is so important to us and I’m so happy I am able to help.”

Did you miss our previous article…
https://www.sportingexcitement.com/football/premier-league/virgil-van-dijk-reveals-tennis-icon-roger-federer-serves-as-his-inspiration-to-gain-psychological-edge-over-strikers