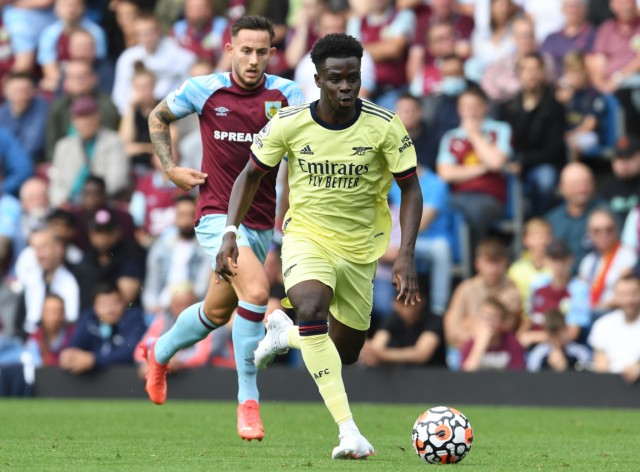 Calciomercato claims the European giants have been impressed by the winger’s stunning rise for both club and country.

However, it’s added that Arsenal will accept no less than £43million for a player regarded as one of Mikel Arteta’s key men.

Saka, 20, has already clocked up 94 appearances for the Gunners since making his debut as a 17 year old in November 2018.

The Ealing-born ace is now a permanent fixture in Arsenal’s starting XI and was also a leading figure for England in their run to the Euro 2020 final.

However, Saka’s fine performances have not gone unnoticed around Europe.

And Arsenal face a battle to hold on to the versatile forward after Juventus and Atletico threw their hats in the ring.

Both sides are eager to land Saka next summer and have been keeping tabs for some time.

However, they will have to cough up at least £43m, with Arsenal refusing to budge on the price tag.

He said: “Some clubs are starting to approach Bukayo Saka, as he’s one of the best players in his position for the future.

“But unfortunately for the suitors, Arsenal will not be parting ways with Saka any time soon.

“Arsenal consider him untouchable. They are planning to build on players like Saka.”

Did you miss our previous article…
https://www.sportingexcitement.com/football/premier-league/shaun-wright-phillips-son-and-grandson-of-ian-wright-dmargio-19-scores-first-stoke-goal-in-u23s-win-over-newcastle