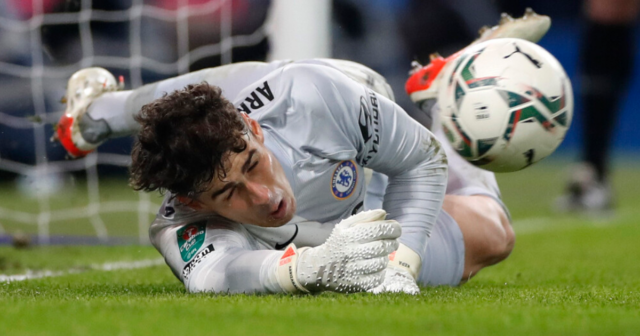 KEPA ARRIZBALAGA was hailed as a mind-reader after more penalty heroics.

Kepa, 27, has twice been the shootout hero already this season, winning Chelsea the Super Cup and then helping the Blues in the previous round of the Carabao Cup against Aston Villa.

After two brilliant late saves to kep the Blues in the tie against Southampton, he again came up trumps from the spot – for the third time in four matches this campaign – and won the praise of his manager Thomas Tuchel.

Tuchel said: “When everyone thinks about stoppage time and penalties it is a dangerous moment, you can lose concentration.

“It was important that Kepa kept us in the game with the double header save from the set pieces.”

The Spaniard came into the game in replacement of in-form No1 Edouard Mendy, 29, to take up his role as cup keeper.

Kai Havertz, 21, put the Blues ahead just before half-time with a header.

But only two minutes after the break Che Adams levelled – with a goal from which Kepa really should have done better as the ball went under him.

Despite both teams knocking on the door, the deadlock was not broken as the tie went to penalties.

Chelsea will now turn their attention on a trip to Newcastle on Saturday.

Tuchel added: “I just said that now we have nine or 10 games in December. That’s our own fault but we hate to lose.

“We go out and play to win. All credit to the guys, they gave everything.

“We have one day off mentally and physically then two days to prepare for Newcastle.”