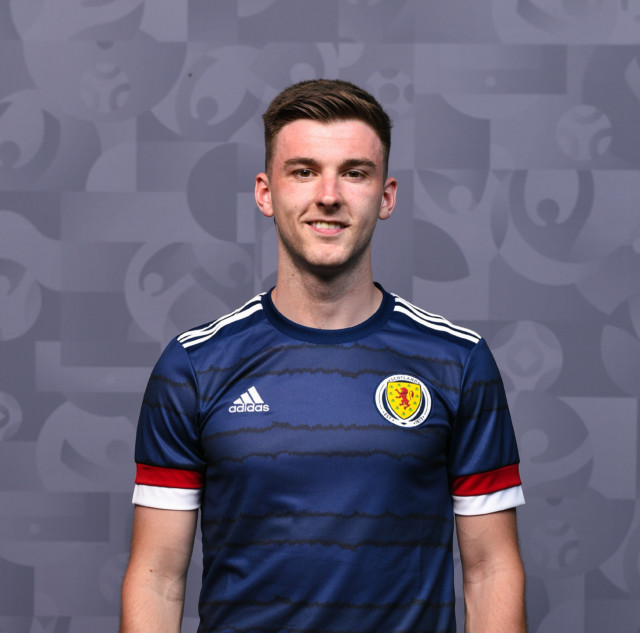 WE now know that common sense prevailed and the rumours that Bukayo Saka was to miss out on Southgate’s final 26 – and leave Arsenal with only two players on show at the Euros – were false.

We will now have three outfield players in contention to play but there seems a real possibility that one of them, Granit Xhaka, may not be a Gunner next season.

Tierney is ready to shine for Scotland at the Euros

Therefore, it is entirely plausible that we Arsenal fans, Saka aside, may have just one player’s fortunes to follow, in Kieran Tierney, and even he will
not be playing in the position he plays for us.

Of course, many Arsenal supporters would sooner Saka had been omitted, allowing him a good summer’s rest on a ‘staycation’ beach.

I predicted a few weeks back in this column that Saka’s versatility would ensure he made the final group.

The irony is that Saka, if he does feature, will probably play in the position his Arsenal team-mate would prefer, at left wing-back.

Because for Scotland, not playing Robertson and Tierney is not an option, as they are probably their two best players, yet both play left back for Liverpool and Arsenal respectively.

Scotland will operate with a back three, with Tierney at left centre back and Robertson at left wing-back.

However, similarly to when he has played that role for Arsenal.

I am sure that Steve Clarke knows his distribution and attacking attributes are not curtailed and will ensure a midfielder covers him if he is to roam or indeed, Robertson is experienced enough to cover if the players interchange in play.

With my Arsenal hat on, it may not seem ideal on the face of it our best player being utilised out of position, but I feel there are positives.

Next season Tierney, already a vocal leader on the pitch for us, will need to be more so, with some older pros leaving this summer.

Carrying such responsibility at the back for Scotland, who will start all three group games as underdogs, can only further enhance his natural leadership qualities.

I also think a period playing left in the back three may improve the defensive side of his game, because he can see more of the play
from the deeper position.

Indeed, I saw a huge improvement in Nacho Monreal as a left back, on the
defensive side, particular in his positioning, after he has played left centrally in a three for a period.

Many among the Arsenal supporting fraternity see Tierney as the logical captain of the club and we will have further evidence to back this claim watching him for Scotland, I am sure.

Some, feel the need for the traditional on pitch leader, as we had in Adams or Vieira for example, is less necessary in the modern game.

Not me, I still want that roll your sleeves up (of course Kieran would not wear long-sleeves anyway) mentality from my club captain and Tierney is that man.

It helps of course, when that player is one of the best in the team and guaranteed to start when fit and our already talismanic Scot ticks both boxes.

It has been a long season for Arsenal and whilst Tierney did have an enforced rest through injury, he will not expend as much energy in a back three as he would bombing up and down the flank, as he
does so effectively.

However, despite the fact, Scotland, on paper at least, are unlikely progress in the tournament, rules might dictate he has to miss much of Arsenal’s pre-season, having played in the Euros.

This being the case, the recruitment of a new left back to understudy the Scot is business Arteta and Edu will wish to conclude early.

I am seriously looking forward to watching our Tesco bag-carrying man of the people superstar further add to his already huge and deserved reputation this month.

Whilst also taking solace that, while we are not as a club where his ability merits, we know he is where he wants to be, assuming
his quote when asked his favourite thing about living in the capital from April holds good: “Just playing for Arsenal. I didn’t move to Arsenal to live in London. I came here to London so I could play for Arsenal.”

Advertisement. Scroll to continue reading.
In this article:arsenal, liverpool