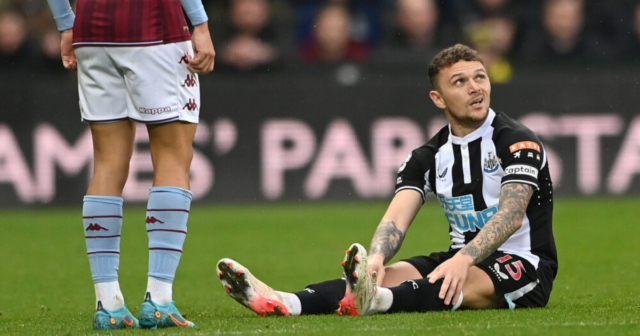 KIERAN TRIPPIER faces a race to be fit for Newcastle’s survival fight after breaking his foot.

The England defender fractured the fifth metatarsal in his left foot after being stamped on in the second half of Sunday’s 1-0 win over Aston Villa.

Trippier, who scored with a free-kick, faces six weeks out.

He said: “It’s really frustrating to have picked up the injury. We’ve built some momentum and long may that continue.

“I will remain positive and work as hard as I can on my rehab to be back fit as quickly as possible.”

The 31-year-old went straight for an X-ray before returning to St James’ Park on crutches with his left foot in a protective boot, and now faces surgery.

Trippier, a £12million signing from Atletico Madrid in January, has been at the forefront of Toon’s revival under boss Eddie Howe.

He has scored the winning goal in the last two games and even captained the side against Villa in Jamaal Lascelles’ absence.

Newcastle are unbeaten in four league matches with him in the side – conceding just two goals and picking up 10 points along the way.

Howe’s 17th placed side are now four points clear of danger and have also played one game less than nearest relegation rivals Norwich.

But the Geordies are set to be without Trippier for at least the next five games until the next international break at the end of March.

The club tweeted: “Kieran Trippier is set to be sidelined for #NUFC’s upcoming fixtures after fracturing a bone in his foot during yesterday’s win over Aston Villa.

“Wishing you a speedy recovery, @trippier2.”

The former Spurs and Burnley full-back scored the only goal of the game as the Magpies won their third straight game in the Premier League.

Javier Manquillo is Trippier’s deputy but Newcastle are sweating on his fitness after the Spaniard also hobbled off on Sunday with suspected ankle ligament damage.

There are hopes Manquillo’s injury is not too severe but Emil Krafth is likely to start at West Ham on Saturday if he doesn’t recover in time.

On Trippier’s influence, Mags defender Dan Burn said: “He’s a different level of quality that we probably haven’t had here for a long time.

“He’s won La Liga and he’s a regular England international – he shows it and the lads feed off him.

“He’s a leader in the dressing room and we just watch and try to copy him.”