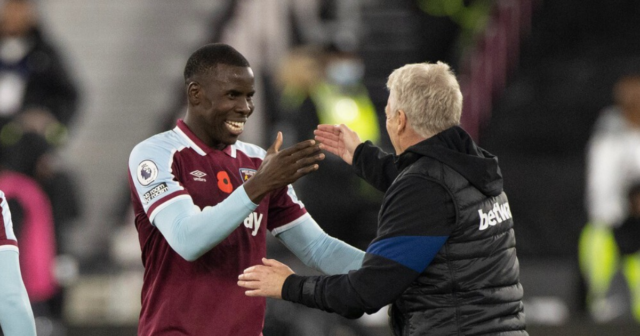 KURT ZOUMA is set to play for West Ham against Leicester City on Sunday as the club continue to stand by the defender over his horrific cat-kicking videos.

In a press conference today, manager David Moyes described the French international, 27, as a “really good lad” and said the club is getting “absolute hell”.

Moyes said Zouma is “hoping he is forgiven” and will be given “animal cruelty lessons” by the RSPCA after SE revealed a video of him kicking and slapping his cat.

The manager also claimed Zouma is “in hell” after the huge public backlash – which also saw him dropped by a string of sponsors including Adidas.

Zouma was fined £250,000 – two weeks’ wages – for the sickening attack on his pet but was still allowed to play for the Hammers on Wednesday night.

It was believed West Ham had dropped Zouma from the squad but the club had never made an official statement.

But despite describing Zouma’s actions as “diabolical”, Moyes has again refused to drop the defender.

The Scot spoke to the media this afternoon ahead of Sunday’s trip to Leicester and said: “Yes he is available to play against Leicester.

“It’s different views and different opinions, should he or not.

“We as a club took the decision to make him available and I stand by that.

“I don’t think the club could have taken more action any quicker than what we have done.

“West Ham have done a very good job. We have fined him maximum wages.”

Moyes continued: “We accept his actions were diabolical, but we have chosen to play him and stand by it.

“It is a terrible incident. We all totally agree. Nobody in this club doesn’t agree with that.

“But with sponsorship being taken away, that’s something the club will deal with, not me.

‘WE ARE ALL TRULY SORRY’

“We are going to get absolute hell. He’s getting hell.

“We are so disappointed. It’s out of character – we have never seen this from Kurt. He is a really good lad. Really surprised by it.

“He is getting help and we are trying to do as much as we can to help him.”

Zouma issued a grovelling apology for the shocking incident, insisting his cats were both ‘perfectly fine and healthy’.

But the felines have now been rescued by the RSCPA after thousands of people lodged complaints with the defender possibly facing prosecution.

The ex-Chelsea man was fined two weeks’ wages, a whopping £250,000, by West Ham and is now set for lessons from the RSPCA into how to treat animals. 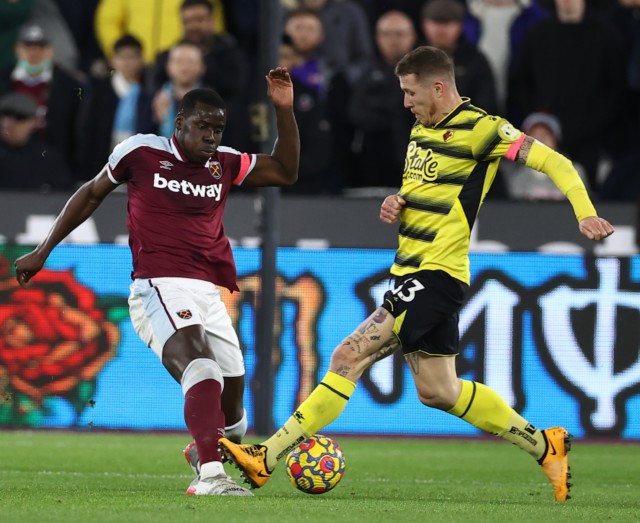 Zouma started the midweek victory over Watford at the London Stadium

Moyes added: “In most drink-driving offences, they have to go to classes to learn from it.

“The RSPCA will provide us with some courses to help him understand how to treat animals.

“He is being treated the same way as any other player. I have never given preferential treatment in my whole career, over 1000 games.

“Sometimes you have to treat players different, such as young up and coming players and very good senior players, but if it’s regarding disciplinary reasons, everybody is treated exactly the same.

“Nobody is hiding away from it. We are all truly sorry.”

Zouma’s brother Yoan, who filmed the incident at the £2million mansion, has been suspended by his club Dagenham & Redbridge until the RSPCA’s investigation is completed.

Leicester boss Brendan Rodgers was quizzed about Zouma’s potential absence during his presser earlier on Friday.

The Foxes chief said: “They’ve got other really good players so we’ll see.

“The system is more or less the same despite whatever personnel and we’ll just prepare for that.

“I don’t know the dressing room, but it looks like David has a really good bunch of guys there.

“They’ve done well this season and it should make for a really good game.”