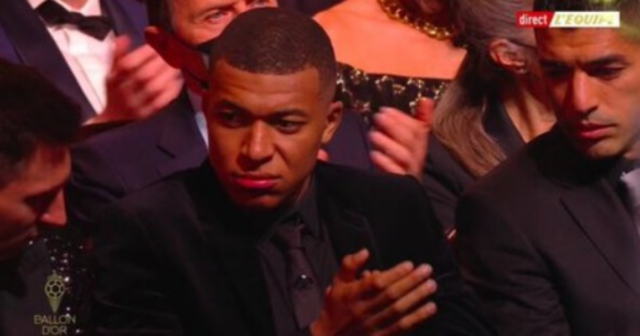 Goal-mad Lewandowski came in second, while also winning the Striker of the Year gong.

And Jorginho – who won the Champions League with Chelsea and Euro 2020 with Italy – took third spot.

But as the list was counting down from No10 to No1, Mbappe was clearly unhappy with his final standing.

With next generation rival Erling Haaland finishing 11th and Gianluigi Donnarumma tenth, the France youngster was clearly startled to finish so low.

After his name was called out at No9, Mbappe looked equal parts bemused and angry.

Kevin de Bruyne, Mohamed Salah, Cristiano Ronaldo, N’Golo Kante and Karim Benzema all finished above him – as well as the top three.

For Mbappe, it was his LOWEST-EVER finish since first cracking the list in 2017.

That year, he took seventh after bursting onto the scene with Monaco, before finishing fourth in 2018.

The PSG striker came sixth in 2019, while the 2020 Ballon d’Or ceremony was cancelled due to the coronavirus pandemic.

Elsewhere on the evening, Donnarumma won the Goalkeeper of the Year award, Chelsea took home the Team of the Year crown, Pedri won the Kopa Trophy for best young player and Alexia Putellas won the Women’s Ballon d’Or.

Did you miss our previous article…
https://www.sportingexcitement.com/football/premier-league/moyes-van-gaal-mourinho-and-solskjaer-all-tried-the-poisoned-man-utd-manager-job-chalice-good-luck-ralf