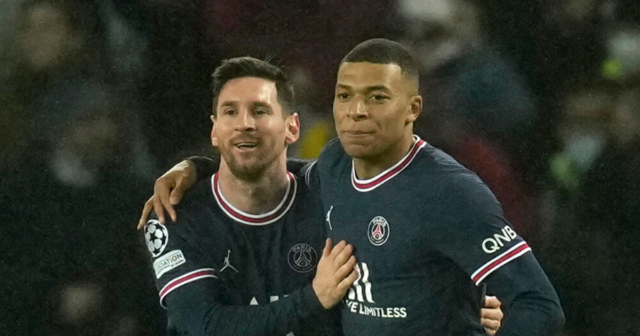 KYLIAN MBAPPE has switched allegiance in the GOAT debate from Cristiano Ronaldo to Lionel Messi.

The French star previously revealed he preferred Manchester United ace Ronaldo but having played with Messi at Paris Saint-Germain, he appears to have had a change of heart.

Mbappé: “It’s easy to play with Lionel Messi, he’s the best player in the world…” pic.twitter.com/nAIGNvd3XC

Mbappe scored twice in the first eight minutes as PSG beat Club Brugge 4-1 in the Champions League on Tuesday.

Messi scored twice more to complete the thrashing and after the match, Mbappe, 22, heaped praise on the seven-time Ballon d’Or winner.

He said: “It’s easy to play with Lionel Messi.

“He’s the best player in the world.

“He won the Ballon d’Or a few days ago, he scored two goals today and he is happy.”

Mbappe’s apparent change of stance came after he labelled Ronaldo the GOAT and his idol in 2020.

A drab 0-0 draw in the Nations League featured a touching moment between the pair.

Mbappe and Ronaldo shared a conversation on the halfway line, smiling and joking with each other before the Juventus ace shot his counterpart a thumbs-up.

Fans watching the game loved the camaraderie between the two world-class forwards.

After the game, the PSG ace tweeted pictures of himself with Ronaldo on the pitch.

He captioned the shot: “Idol.”

And two emojis hammered home Mbappe’s admiration for the five-time Ballon d’Or winner – a crown and a goat.

Did you miss our previous article…
https://www.sportingexcitement.com/football/premier-league/inside-john-terrys-birthday-party-as-he-takes-chelsea-pals-clay-pigeon-shooting-and-is-gifted-personalised-drinks-set

Advertisement. Scroll to continue reading.
In this article:chelsea, manchester united