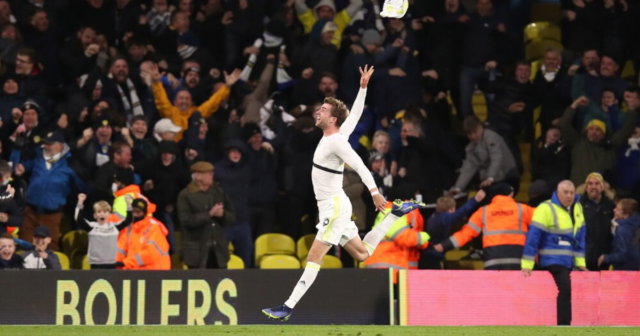 LEEDS could face an FA probe after Sergi Canos appeared to be hit by a bottle after scoring Brentford’s second at Elland Road.

And all looked lost on the pitch after they threw away a 1-0 lead until Patrick Bamford came off the bench following a nine-game absence to snatch an equaliser with virtually the last kick of the game.

Tyler Roberts had put the Whites ahead in the first-half after converting Raphinha’s cross.

But Marcelo Bielsa’s side fell apart in seven second-half minutes which saw the Bees turn the game on its head.

And it looked like Canos had won it soon after, latching onto Bryan Mbuemo’s through ball and dinking over the Frenchman.

But as the Bees winger wheeled off in celebration, a missile was hurled at him from the Don Revie Stand.

The Spaniard fell to the ground clutching his neck, with the incident certain to go into ref David Coote’s report. 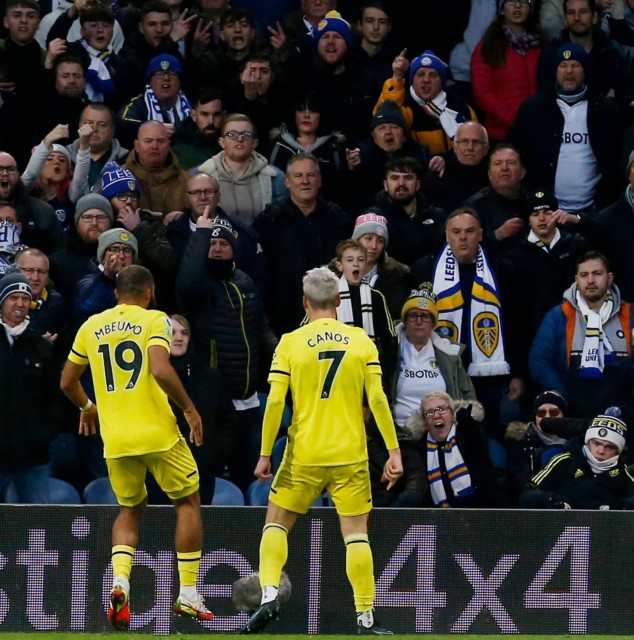 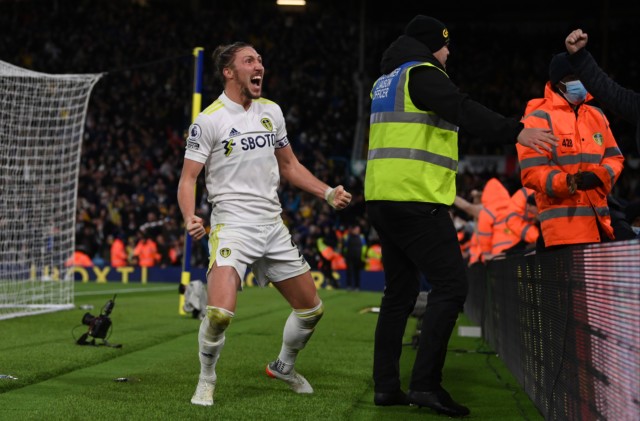 It was the hosts who finished the happier of both sides

Bielsa threw Bamford on with 22 minutes remaining to try and claw something back.

And he delivered right at the death, teaming up with Luke Ayling – who has also been out for the last nine games – to rescue a point.

Ayling met Raphinha’s corner at the near post and nodded it back to Bamford, who bundled it home to send Elland Road wild,

Brentford were rocked by the absence of Ivan Toney following a positive Covid test. 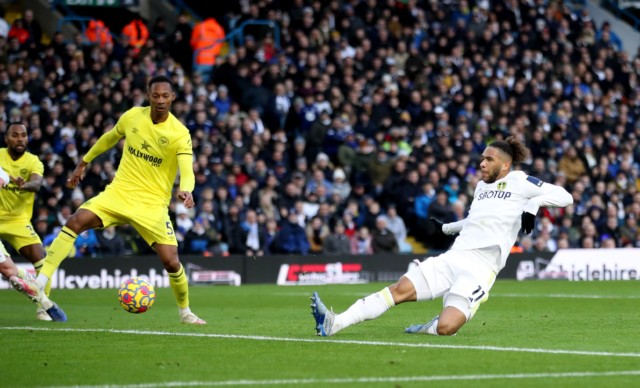 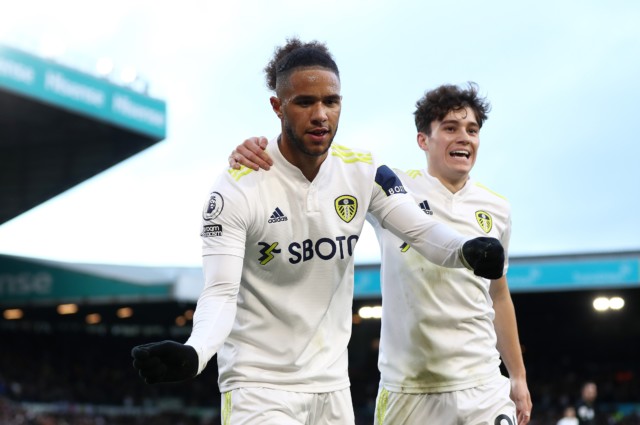 Roberts hit the target after being played in by Raphinha

But the Bees started brightly in the first top-flight meeting between the two since 1947, with Bryan Mbuemo scuffing the first decent chance well over.

Whites skipper Liam Cooper injured himself trying to challenge the forward and limped off clutching his hamstring, replaced by Jack Harrison.

A subdued opening at Elland Road, the game burst into life 27 minutes in when Roberts, who started as striker but moved back after a reshuffle, snuck into the box to poke Raphinha’s cross home.

The Brazilian’s first cross from the left was headed straight back to him, with his second an absolute peach. 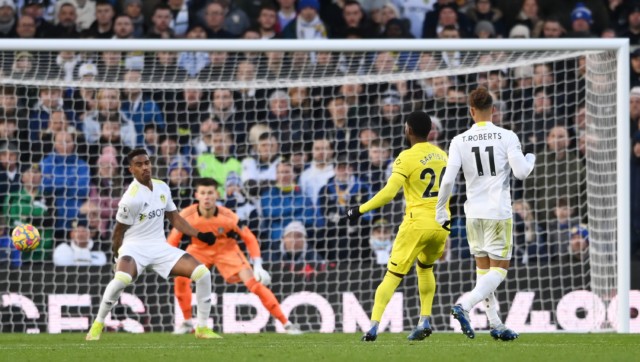 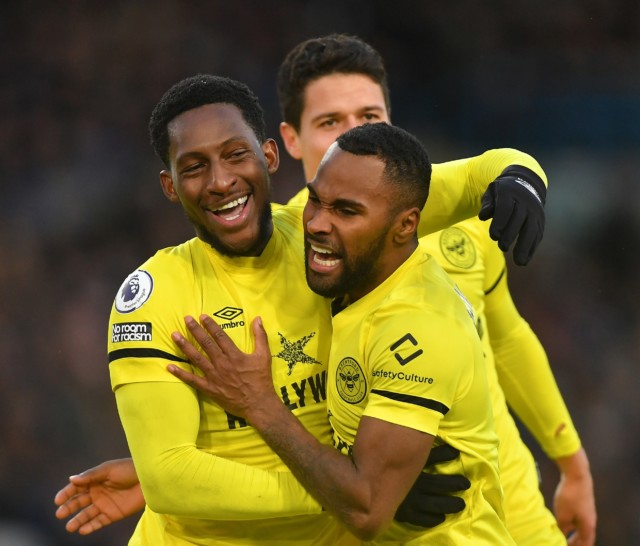 The equaliser energised Brentford, who were without star man Ivan Toney

Low and in behind the Brentford defence, Roberts timed his run to perfection and stabbed it past Alvaro Fernandez on the slide from six yards.

The ex-West Brom academy star was suddenly here, there and everywhere as Leeds looked to kill the game off.

Moments after his goal he had a fizzer tipped over from 20 yards.

He then put a wicked ball into the corridor of uncertainty from the right, with Pontus Jansson just managing to scramble it away. 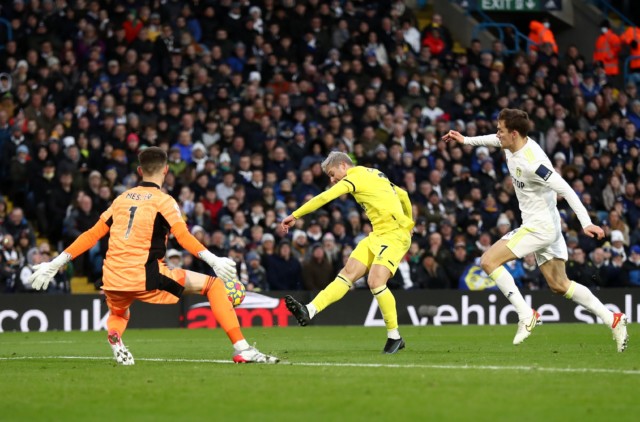 Canos put Brentford ahead in the 61st minute 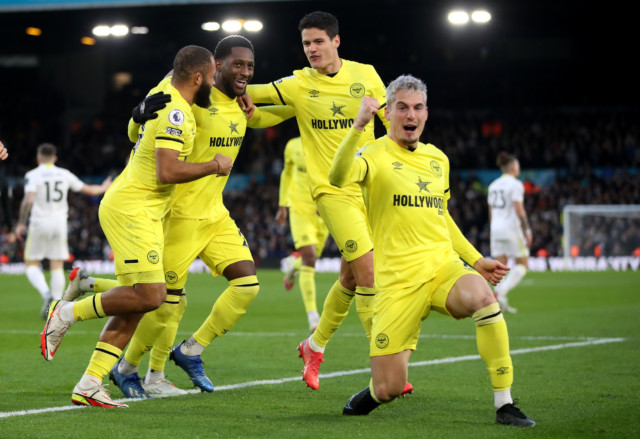 Leeds were straight back on the front foot after the break and nearly doubled their lead through Ayling.

The full-back’s near-post header from Raphinha’s free-kick was heading for the top corner, only for Fernandez to excellently leap to his right and fingertip away.

And Leeds were punished moments later when, out of nowhere, the Bees were level through Baptiste 54 minutes in. 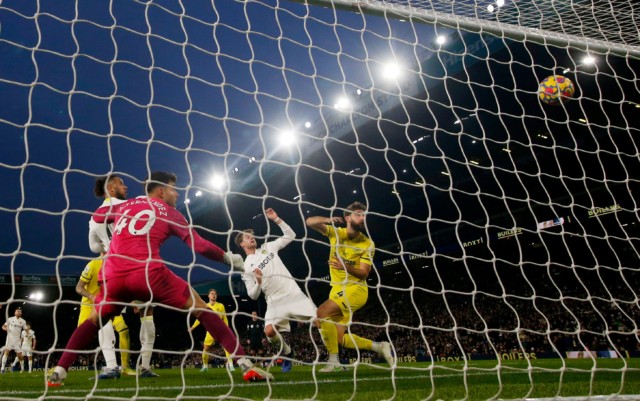 Bamford stole the show with the final kick of the game 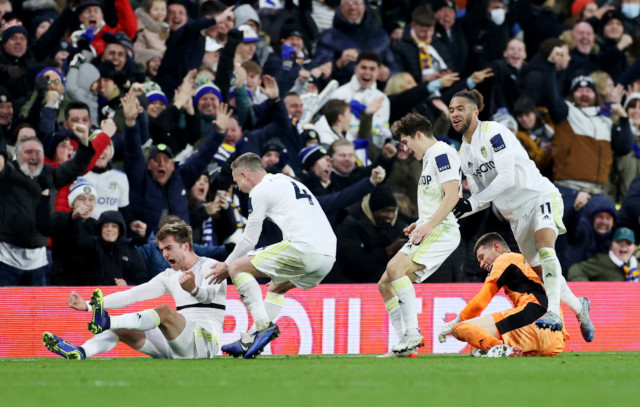 After a right tussle with Stuart Dallas on the left touchline, Rico Henry managed to play inside to Sergi Canos.

The Spaniard’s cross was deflected into the path of Baptiste, who fired first-time into the ground and beyond Meslier.

Leeds were now all over the place, with Canos heading a deep cross just wide.

But he put them ahead moments later, seven minutes later after the equaliser, to leave Bielsa’s side shellshocked.

After Leeds gave it away cheaply, Canos played it to Baptiste and got on his bike.

Baptiste released Mbuemo, who played a lovely reverse pass through to Canos who, one-on-one lifted it over Meslier.

But things turned ugly as Canos wheeled away in celebration in front of the Don Revie Stand, with the winger falling to the ground holding his neck after being hit by a missile.

Did you miss our previous article…
https://www.sportingexcitement.com/football/premier-league/jose-mourinho-planning-to-raid-man-utd-for-diogo-dalot-with-defender-most-concrete-transfer-option-for-roma