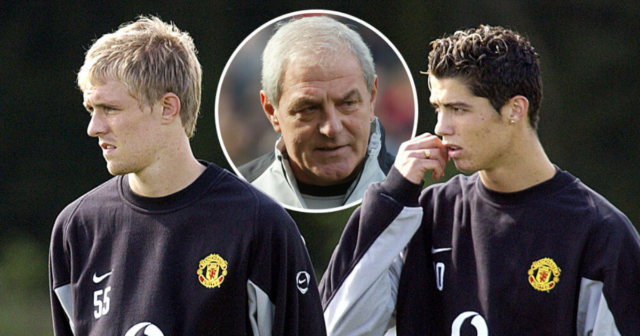 CRISTIANO RONALDO became the player he is today courtesy of former Manchester United assistant Walter Smith, according to Darren Fletcher.

Portuguese superstar Ronaldo and Scottish midfielder Fletcher were team-mates at United for six years between 2003 to 2009.

Cristiano Ronaldo (right) is the player he is now thanks to Walter Smith, according to former team-mate Darren Fletcher

Boss Sir Alex Ferguson was briefly assisted by former Rangers and Scotland manager Smith at Old Trafford in the 2003-04 season.

Fletcher has divulged the unusual technique the Scottish coach used in training to bring on Ronaldo’s play.

Ronaldo joined the Red Devils and the Premier League from Sporting Lisbon as an 18-year-old in 2003 with his talent immediately clear to see.

But during his first season in England, Smith would deliberately not blow for fouls on the Portuguese winger in training, aiming to make Ronaldo better at using the ball more efficiently.

“With Ronaldo, you could see the talent and the ability.

“The players were part of the reason he signed in that pre-season game against Sporting Lisbon when he tore us apart.

“Eventually, Walter Smith came in and decided not to give fouls in training. I think the sole purpose was for Ronaldo.

“So when Ronaldo was doing his skills, not passing the ball and taking the mick, the lads were fouling him.

“For two weeks, Ronaldo was tearing his hair out – and he was going bananas!

“What happened after a few weeks? Ronaldo starts moving the ball because he’s sick of being kicked.

“Now he starts playing one or two-touch and running, now he starts getting more goals and it’s clicking in his head, he’s having more of an impact on games. That was the beginning of Ronaldo’s transition.”

Ronaldo has gone on to have a stellar career since both he and Smith left Old Trafford.

The 36-year-old won five Ballon d’Or awards – second only to arch rival and Barcelona captain Lionel Messi who has six – and his success may all have been kick-started by Walter Smith 17 years ago.

And now he’s back at United where it all began.