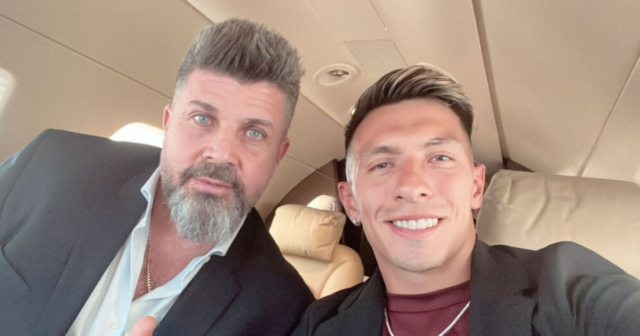 LISANDRO MARTINEZ has boarded a private jet heading for England with the defender set for a medical at Manchester United.

The Ajax centre-back will link up with his former boss Erik ten Hag at Old Trafford.

The centre-back will join Man Utd in a £42m transfer

Argentine Martinez will join United in a £42million transfer and looks set to become Ten Hag’s third signing of the summer.

United have signed Tyrell Malacia from Feyenoord and free agent Christian Eriksen, with both having Eredivisie experience.

Martinez has posted a picture on board a private jet heading for Manchester alongside Elche owner Christian Bragarnik.

Man Utd have agreed a fee with Barcelona for the Dutch midfielder.

However, De Jong is eager to say at the Camp Nou this summer.

President Joan Laporta has also confirmed De Jong will be on Barca’s US Tour.

On Friday, he said: “It’s not true that we are forced to sell Frenkie de Jong, this is not correct.

“Frenkie’s trip to the US will be decided by Xavi. I understand that Frenkie will be on the US tour.”