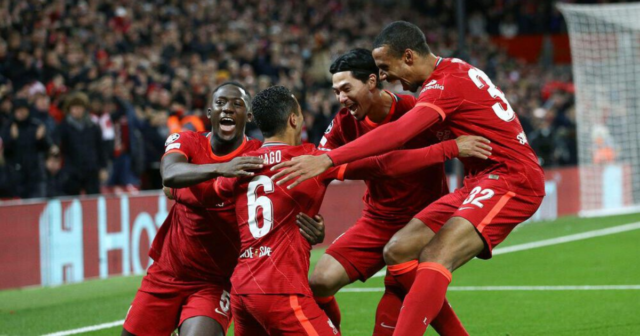 THIS was exactly why Liverpool fans were drooling when they signed Thiago last summer.

The kind of gorgeous knack to manipulate a football – encapsulated here with a breathtaking volley – that would elevate their already star-studded side to new heights.

Of course, supporters have not seen it as often as hoped during the Spaniard’s first 14 months at the club due to his injury and Covid issues.

But this exquisite effort from 30 yards which broke Porto’s resistance proved to be worth waiting for from the midfield magician.

And why his ability to do things that are beyond all his team-mates – barring Mo Salah – could be the key to their success this season.

Salah killed this game off 20 minutes from time to put the Reds into the history books, as they became the first English team for 82 years to net two or more in 16 consecutive games.

Jurgen Klopp’s free-scoring side made it a staggering 49 goals in that run which equalled the Wolves team who were playing the year the Second World War broke out.

Liverpool were already home and hosed before kick-off here, having secured top spot and safe passage to the knockout stages by winning all four of their previous group games.

It allowed Klopp to shuffle his injury-hit pack and that saw young midfielder Tyler Morton make his Champions League debut – surprisingly, from the start.

Klopp had talked up the 19-year-old in his pre-match press conference, praising Morton for being ‘well-educated, well-behaved and not overly confident’.

The local lad has generated some buzz within the academy for some time and had been training with the first team since pre-season.

He was handed his professional debut in September in the EFL Cup, his first start a month later in the same competition, his Premier League bow against Arsenal at the weekend and now his first European appearance.

Morton lined up in the Fabinho position at the base of midfield and the rangy teenager was tidy alongside the vastly experienced Thiago and Alex Oxlade-Chamberlain.

Yet with the Reds much-changed and not needing the points, there was an opportunity for Porto to take advantage to aid their own cause.

Their golden opportunity fell to right-winger Otavio, and only he will know how he missed it. His crestfallen manager Sergio Conceicao certainly had no clue on the touchline.

The excellent Luis Diaz raced through down the left and squared it for his fellow wideman.

But somehow Otavio fired wide, before attempting to claim a penalty for a challenge from Kostas Tsimikas which was never going to happen. 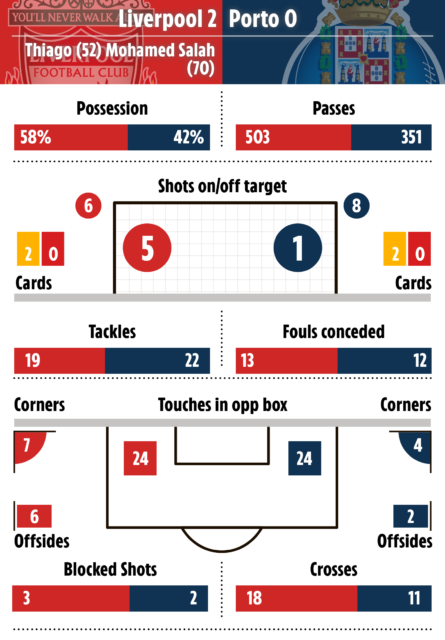 How the match panned out

Minutes after Sadio Mane had a goal ruled out for offside, Otavio went some way to making up for his error with a clever ball through to striker Mehdi Taremi just before the break.

Yet the Iranian inexplicably gave a blind pass to no one instead of shooting.

It was a bizarre act of inappropriate selflessness from a centre-forward who has just under a goal a game in his 66 Porto games, including an outrageous overhead kick against Chelsea last season.

Porto’s push for a shock lead continued after the break with Matheus Uribe dragging wide from close range.

Thiago made the visitors pay for their wastefulness in scintillating style.

A weak Oxlade-Chamberlain free-kick was headed clear but fell to the ex-Barcelona man who cut across the ball with his right foot, sending it sailing low into the far corner.

It was the kind of finish that would be beyond most players and showed just why Gary Neville felt Liverpool would run away with the title once they signed the midfielder.

Neville said that at the start of last term, before Thiago’s and Liverpool’s injury woes. Perhaps the pundit was just out by one season.

Salah got in on the act soon after to finish the contest, coming in from the right, skipping around a desperate Uribe before firing in his 17th goal in 17 games this term.

His strike made it 55 for the campaign for Liverpool, who are looking unstoppable now Thiago is purring. 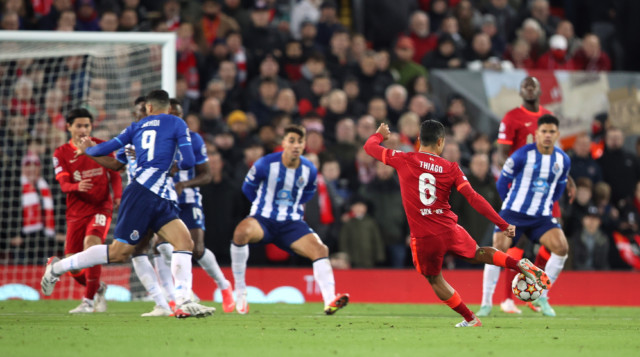 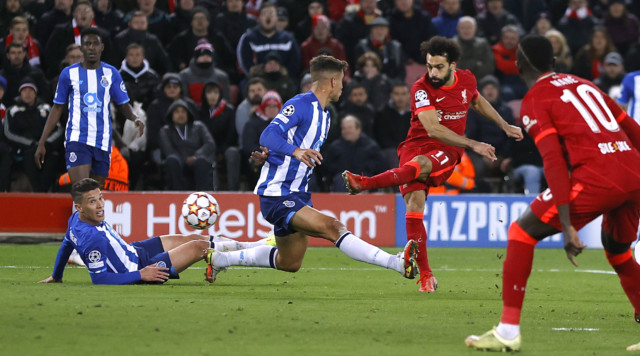