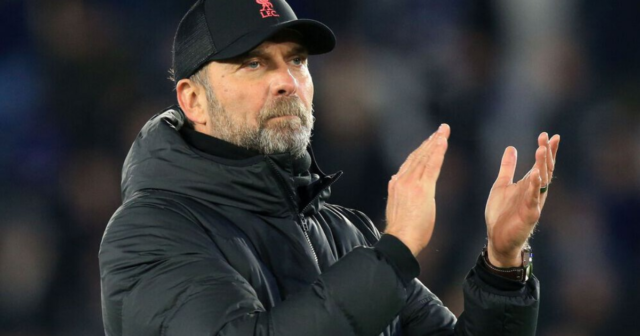 JURGEN KLOPP has been dealt a blow after three new suspected positive cases of Covid-19 have been recorded among his Liverpool squad.

Liverpool travel to Chelsea on Sunday in a mouthwatering Premier League clash, but Klopp will forced to field an under strength side if the game goes ahead.

Klopp also revealed that there were ‘a few’ positive cases within the staff at the club.

The Liverpool boss currently ‘doesn’t know’ if the Reds will call for Sunday’s game to be postponed, but didn’t rule it out.

He also didn’t disclose which players had tested positive for the virus.

In his press conference ahead of the weekend’s game, Klopp told the media: “We have three new Covid cases in the team and a few more in the staff, so it’s not so cool in the moment.

“I’m not [able to reveal the names] because we still have to make the whole processes, getting a proper PCR and all these kind of things, but you will see the day after tomorrow on the teamsheet.

“It will be pretty clear then who is affected or infected.”

And when asked if Liverpool would potentially ask for the game against Chelsea to be postponed, Klopp said: “Not yet, but we don’t know.

“We never had this kind of proper outbreak where 10, 15, 20 players had it, for us it’s more every day another one.

“Staff happens now more and more often, so as I said before it feels like a lottery in the morning when you stand there and you wait for the result.

“It was now pretty much day by day always one case – today another one.

“We have to wait, the boys are not even in yet, so we have to wait. In this moment, probably not but we don’t know how it will look in a few hours.”

Should the game go ahead Liverpool will be looking to avoid a second successive defeat, following the 1-0 loss to Leicester last time out.

And dropping points at Stamford Bridge on Sunday would see Klopp and Co lose yet more ground on Manchester City in the Premier League title race.

The news of Liverpool’s Covid cases comes just hours after Newcastle’s trip to Southampton on January 2nd was postponed due to an an outbreak of the virus in Eddie Howe‘s squad.

That was the 17th top-flight game to be called off since December, with the possibility of more to come in the near future.