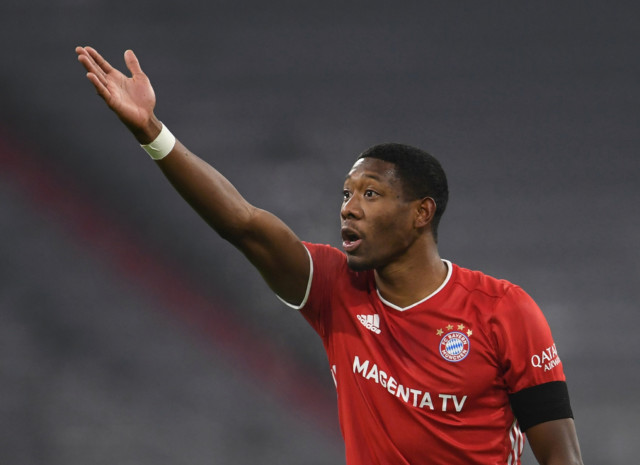 LIVERPOOL have made a last-ditch bid to hijack Real Madrid’s move for David Alaba on a free transfer, according to reports.

The Bayern Munich star, 28, is available for nothing in the summer when his current contract runs out.

Liverpool have made a last-gasp bid to sign David Alaba, say reports

Alaba refused to pen fresh terms at the Allianz Arena, believing club bosses didn’t value him as highly as the likes of Thomas Muller and Robert Lewandowski.

The versatile Austrian defender is already able to negotiate pre-contract terms with foreign clubs ahead of a free move on July 1.

On Monday, reports claimed Real Madrid had already ‘won the race’, beating Barcelona to the punch, with the Nou Camp giants unable to afford him.

But Liverpool haven’t given up hope of stealing Alaba away from Real Madrid’s clutches, according to transfer guru Fabrizio Romano.

Romano tweeted: “Liverpool are among the five clubs that have contacted David Alaba agent to sign him next summer.

“But Real Madrid are leading the race, they’re pushing to sign Alaba.

“David dreams of playing for Real Madrid and talks with Real are progressing.”

Kop idol John Barnes has revealed he believes Liverpool MUST sign a defender this month, though with Virgil van Dijk, Joe Gomez and Joel Matip all injured.

“Liverpool need a stop-gap defender – they’re probably not going to get the best centre-back in the world in January.

“The centre-back issue is hurting the midfield by taking away players to play in a defensive role.

“Liverpool are not used to the current midfield playing every week so the front three players are not as fluid as they normally are when they haven’t got the regulars playing behind them.

“A centre-back will strengthen Liverpool and give them more of an opportunity to win the league.”

Meanwhile, another Liverpool legend, Jamie Carragher, went as far as to say the Reds won’t retain their Premier League title without a new defender.

“I said that after the Everton game when Van Dijk was injured but I think it’s a really tough ask if they don’t bring anyone in.

“The fact they played Henderson at centre-back is not going to do a lot for the two lads on the bench (Rhys Williams and Nathaniel Phillips) and their confidence if they have two midfielders playing there.

“Henderson is not a centre-back. He did well, but it’s not his position.”