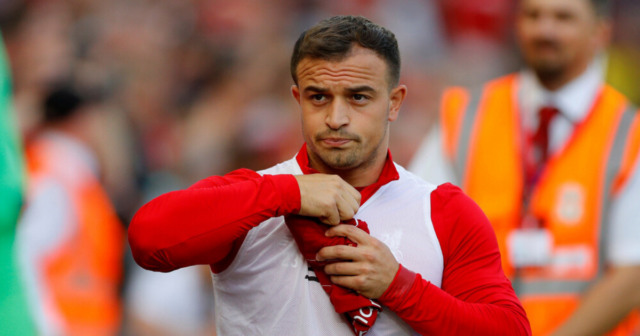 Xherdan Shaqiri has sent Lazio a “come and get me” appeal – and insisted Liverpool won’t stand in his way.

The Switzerland winger has spent the last three seasons at Anfield following a £13.5million move from Stoke City.

However Shaqiri, 29, has had to make do with bit-part roles in Jurgen Klopp’s side.

Under contract for one more season, he now hopes to return to Italy after a Serie A spell with Inter Milan six years ago.

He has been linked with Lazio, managed by former Chelsea boss Maurizio Sarri.

The Rome giants’ sporting director Igli Tare has Albanian heritage in common with the Liverpool ace.

Shaqiri said: “The main thing at this stage of my career is to play regularly, but that hasn’t always been the case these last three seasons.

“I have told Liverpool I am ready for a new challenge. They accepted my wishes, and they are seriously considering the offers coming in for me.

“They won’t stand in the way of me leaving.

“I am just 29, I have played in some of the best leagues in Europe, and I want to continue.

“Football in Italy has developed in the last few years. Their Euro 2020 win is the proof, and it was deserved.

“Igli Tare has been doing a great job at Lazio for years. If it is true that he rates me highly, then I feel honoured.

“I have followed their fortunes for a long time, and they are a top club. They play a 4-3-3 system under Maurizio Sarri.

“I like to play attacking football, as it suits my characteristics, and that is the style Sarri favours. It would be intriguing to play for them.

“My spell at Inter was the wrong club at the wrong time. But I don’t regret it – it was an experience that made me stronger.

“Who could not enjoy the Italian way of life? The Italians love their football, and the support is amazing.”