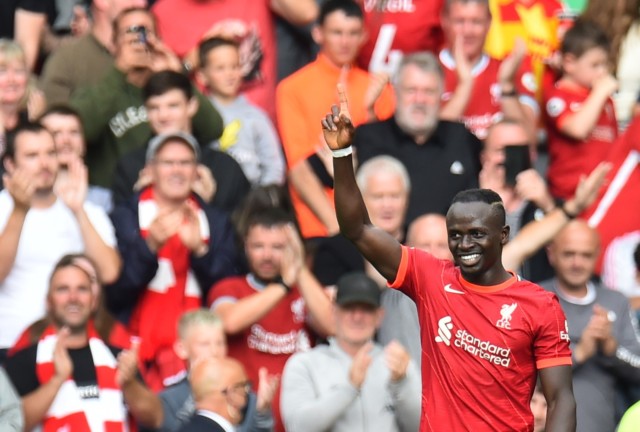 SADIO MANE couldn’t resist taking a swipe at Crystal Palace after scoring in Liverpool’s 3-0 win over them at the weekend.

The Senegalese striker scored his 13th goal in nine consecutive games against the Eagles and joked that he wouldn’t mind playing them all the time.

It’s the first time in Premier League history that a player has scored so many times in a row against one club.

And Mane, who also got his 100th Reds goal in the game, reckons if he goes up against Palace, anything is possible.

He told BBC Sport: “I am lucky to score so many goals against Palace.

“I would love to play against Crystal Palace… it would be great to play them every single weekend.

But despite his bravado, Mane dedicated his new records to the Kop’s fans and said the club’s win was more important than his individual feats.

He added: “Most important thing was the three points.

“Right place, right time. I am lucky. And happy. Thank you to all the fans, club and staff. Without them I am nothing.”

Mane was a nightmare for Palace the last time the Reds played them in the last game of the previous season.

The ex-Southampton attacker struck twice during the game to seal Champions League qualification for Jurgen Klopp’s side and condemn the Eagles to a 14th place finish in the Prem.

But Liverpool fans will be hoping that Mane sticks around to be a nuisance to Palace in the future as he’s yet to commit his long-term future to the club.

The Reds are hoping to convince their 29-year-old star forward to stay at Anfield until he’s 34, it was reported last week.