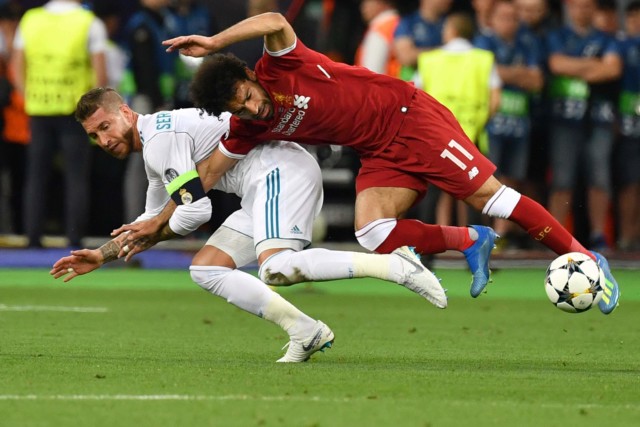 Ramos was slated and even had death threats sent to his children for wiping the Reds’ danger man out of the 2018 showpiece.

The pair tussled for possession and both fell to the ground, with Salah suffering a serious shoulder injury.

The Egyptian lasted just 31 minutes in Kiev before trudging off in tears, fearing the injury would rule him out of that summer’s World Cup.

Despite Salah having no problem with Ramos, Lovren took matters into his own hands to exact revenge.

Later that year his Croatia side faced Ramos’ Spain in a Nations League clash.

So the ex-Liverpool centre-back made the most of the chance to deliberately smash his rival with an elbow – earning him a red card in the 3-2 win.

At the time he wrote on social media: “I elbowed him good. Haha! 3-2! Go ahead and talk now buddy. Buddy!”

But in an interview with Egyptian TV station Sada El Balad, Lovren confirmed he purposefully went out to get Ramos that night.

Lovren looked out for his old Liverpool buddy Salah

He said: “I deliberately hit Ramos after hurting Salah? Yes, this is possible.

“Luka Modric tried to reduce the tension between me and Ramos, and we were facing Spain together with the Croatian national team, and I deliberately hit him with my elbows and told him that we have drawn now.

“I respect Ramos as a player and what he does for his team. He has won a lot of titles, but on the other hand, he does some behaviour that I do not like and harm the players.

“I do not want to make a big story, but I think that what Ramos did was intentional to injure my friend, so it was time to pay for what he has done.

“We were playing much better than Real Madrid before Salah was injured in the Champions League final. His exit was a big blow for us, after his exit, they began to dominate the match.”

Salah and Lovren formed a unique bromance during their time together at Anfield.

But the flying forward was left gutted last summer when Liverpool sold the defender to Zenit.

Jurgen Klopp joked Salah will now be searching for a new ‘best friend’.

And speaking in a clip posted to Liverpool’s Twitter page, Salah said: “We are really going to miss you a lot, especially me.