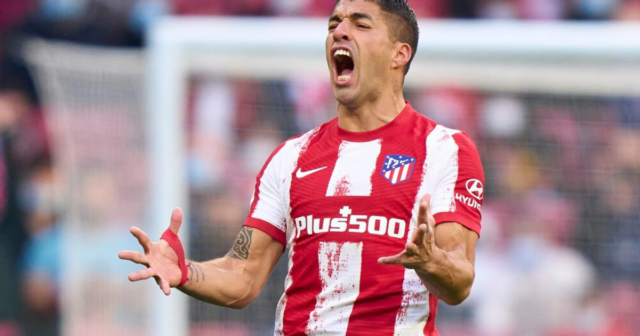 LUIS SUAREZ has been linked with a startling move to Aston Villa, according to sensational reports in Spain.

The 34-year-old Atletico Madrid striker, whose contract expires in the summer, is said to have rejected a number of clubs as he is keen to link up with former Liverpool team-mate Steven Gerrard.

SunSport understands Aston Villa have not yet made a bid for the Uruguayan.

But journalist Gerard Romero is reporting that Suarez is open to a move to the Midlands.

The South American forward spent four seasons at Anfield where he netted a superb 82 goals in 133 appearances.

When speaking about Suarez in 2015, Gerrard said: “I don’t think anyone ever looks forward to playing against Luis Suarez, he is a fantastic talent and a very dangerous player.

“He is a fantastic team-mate, probably the best player I have played with.

“He’s a good guy, a family man away from the pitch, we keep in touch and have supported each other throughout our careers.”

His only trophy with the Reds came in 2012 when he lifted the League Cup alongside Gerrard.

Suarez did come incredibly close to winning the Premier League in 2014 but Liverpool were eventually pipped by Manchester City.

He then joined Barcelona in 2014 where he would go on to win four LaLiga titles and the Champions League.

Six seasons at the Nou Camp came to an end in 2020 and he has since gone on to win the Spanish top flight with Atletico Madrid – scoring 30 times in 65 games for Diego Simeone’s side.

Meanwhile, claims of Suarez signing for Villa have come just one week after his old Barcelona team-mate Philippe Coutinho joined the club.

And the Brazilian hit the ground running at Villa Park as he scored on his debut to earn Gerrard’s men a deserved 2-2 draw against Manchester United.

Along with Coutinho, Villa have also added Everton full-back Lucas Digne to their squad in the January window.

And on Tuesday they secured the signing of back-up keeper Robin Olsen in a bid to hand Emiliano Martinez competition for the No1 spot.

Villa currently sit 13th in the Premier League table with seven wins from their opening 20 games.

Next up for the Midlands outfit is a trip to take on managerless Everton on Saturday lunchtime.

Did you miss our previous article…
https://www.sportingexcitement.com/football/premier-league/watch-as-ex-chelsea-boss-sarri-is-floored-and-glasses-fly-off-after-udinese-ace-collides-with-him-in-lazio-clash