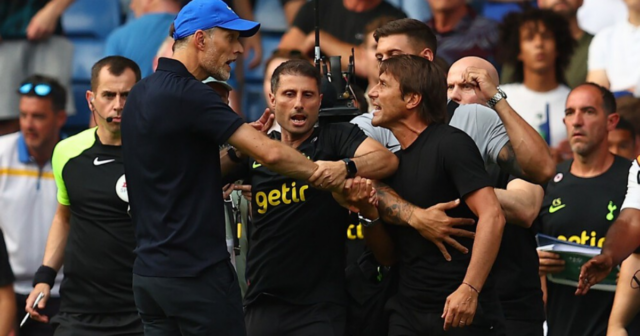 ANTONIO CONTE continued his feud with Thomas Tuchel long after the two bosses had headed home from the Battle of the Bridge 2.0.

The Italian took to social media joking that he should have TRIPPED UP Tuchel as the Chelsea gaffer celebrated his side’s second goal. 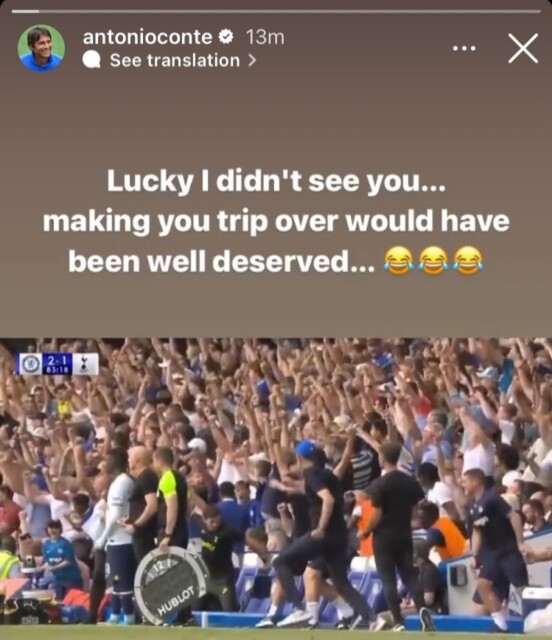 The Italian hilariously joked that he would have tripped Tuchel up

Conte and Tuchel initially came to blows when Pierre-Emile Hojbjerg rifled in an equaliser to make the game 1-1 after Kalidou Koulibaly’s opener.

Reece James then made it 2-1, with his goal sending Tuchel running down the touchline past Conte in celebration.

And the Tottenham boss joked on Instagram late last night that Tuchel was lucky he had not spotted his wild celebrations.

Conte also said that his opposing manager DESERVED to be tripped up.

He posted a picture of Tuchel running past him and wrote: “Lucky I didn’t see you… making you drip over would have been well deserved.”

The pair also went at it again when Anthony Taylor blew for full-time, which saw them both given second yellows and sent off.

Tuchel said after the game that he let his emotions get the better of him.

Conte meanwhile remained tight-lipped when quizzed by the media, but wasn’t afraid to have another pop at Tuchel on social media.

Riding on a wave of emotion, he hilariously made sure he got the last word in on social media following the pulsating 2-2 draw at Stamford Bridge.

Tuchel did not let go of Conte when they begrudgingly shook hands at full-time.

And the Chelsea boss said: “I thought when we shake hands you looked in each other eyes. He had a different opinion. It was not necessary but a lot of things were not necessary.

“We both got a red card. I think it was not necessary. Another poor referee decision.

“No problem. It’s emotional, it’s football, it’s the game, it’s the Premier League. You love it, we are emotional on the touchline.

“If we meet, we meet. It’s between a football match, it’s men (and) two competitors.”