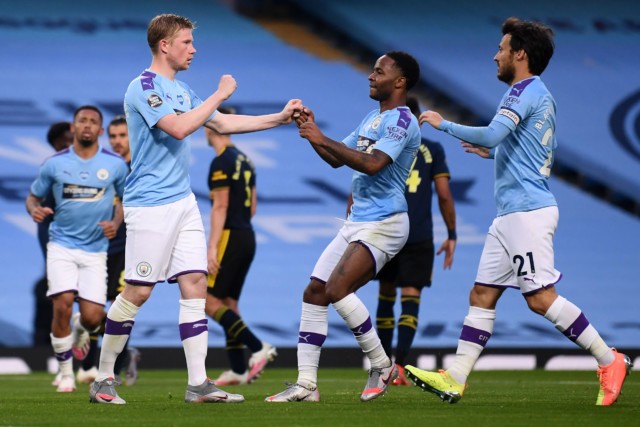 THE champagne will have to stay on ice on Merseyside this weekend.

Liverpool old boy Raheem Sterling made sure that Jurgen Klopp’s men will have to wait even longer to take the Premier League crown. 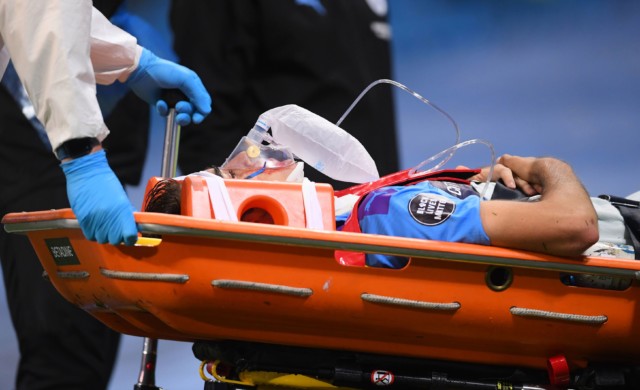 A slip from Manchester City here would have meant the Reds could have clinched it with a win at Goodison on Sunday evening.

And how sweet would that have been after waiting for such a moment for 30 years – and a little bit more?

However that never looked likely once City had shaken the cobwebs off and found their stride.

Sterling struck his first goal of 2020 just before the break after a mistake from the hapless David Luiz – who was later sent off.

And skipper Kevin de Bruyne scored from the spot to make sure the sorceror Pep Guardiola got one over on his apprentice Mikel Arteta.

Some 11 minutes were added on after Eric Garcia’s sickening injury but City were in no mood to give Arsenal any hope.

Sub Sergio Aguero always scores against the Gunners but his shot was pushed onto the post by Leno and fellow sub Phil Foden slotted in the rebound.

So despite a very different feel to the night, it was very much business as usual for the out-going champs – who make a habit of beating the Gunners.

Much has happened since City last played here at the Etihad – almost four months ago when they played West Ham.

Many things have changed – yet it was almost reassuring to see the Manchester weather hasn’t.

The teams were greeted by a spectacular thunder storm and torrential rain. 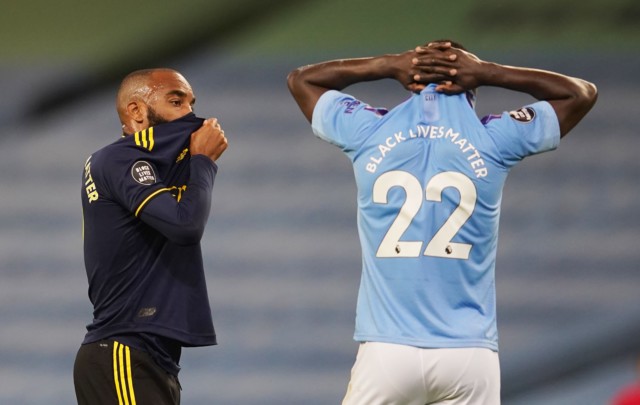 Players from both teams were shocked at Garcia’s horror clash 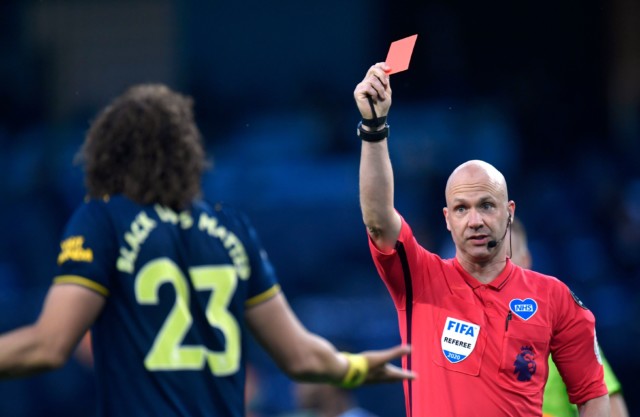 Luiz gifted City their first two goals and was sent off

That continued as the players held a minute’s silence to remember the victims of the Coronavirus – and then took a knee so show solidarity with the Black Lives Matter movement.

Guardiola had warned in the pre match press conference that he feared players were not ready for the re-start and could get injured.

Yet even he must not have expected one quite this quickly as Granit Xhaka went over on his ankle and immediately looked in serious discomfort.

It quickly became clear the Swiss midfielder’s day was done and he was stretchered off – replaced by Dani Ceballos with just eight minutes on the clock.

By that stage De Bruyne had already seen a free-kick tipped over by Bernd Leno – but otherwise chances were hard to come by.

Midway through the first half Kyle Walker steamed into the visitors box but his pull back didn’t find anyone and was cleared.

Yet Gunners defender Pablo Mari had pulled something while trying to keep pace with the former Tottenham man – and he too had to go off.

This was not how Mikel Arteta – who spent three and a half years doing his apprenticeship under Guardiola – imagined it to be on his return.

Luiz was his replacement and City quickly began to make some openings.

Leno – who was once a target for city before they signed Ederson – made diving stops to keep out Sterling and David Silva.

The Spaniard and De Bruyne then combined delightfully to set up Riyad Mahrez but the keeper was out to thwart him with his shins. 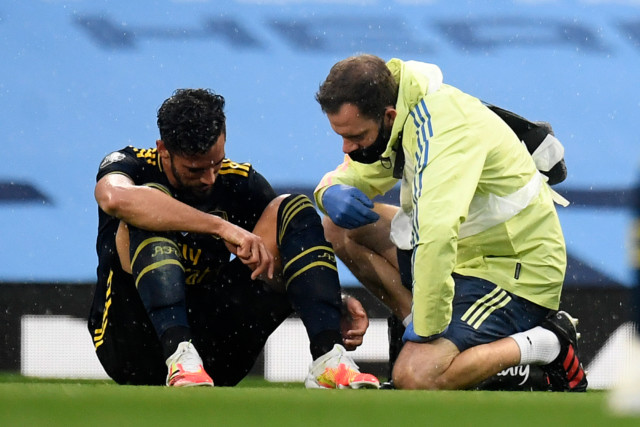 KdB was starting to find his range now and another delicious through ball sent Sterling clear but he lifted his shot over Leno and onto the roof of the net.

A goal seemed to be coming though – and just before half-time it arrived.

It was no surprise that de Bruyne was the architect with a dangerous ball forward but Luiz should have dealt with it.

He failed to control and Sterling nipped in – allowing the ball to bounce before thumping it past Leno – even he couldn’t stop that one.

Amazingly that was Sterling’s first goal of the calendar year – and here we are on June 17.

But he became the first player to score a top flight goal in June since 1947.

Arteta must have been worried with the way the first half ended and it only got worse for his team after the break.

Mahrez sped into the box and was grabbed around the neck by Luiz – which referee Anthony Taylor saw as a penalty and a red card.

What a disastrous 27 minutes it had been for Luiz.

This week Arteta had urged the board to hand him a new contract at the Emirates – he might be having second thoughts after this.

De Bruyne waited for the VAR to confirm the decision and then sent Leno the wrong way from the spot.

After missing four penalties this season, City look to have finally found their spot-kick king in the Belgian – who also scored in Madrid in February.

Arsenal had not managed a shot on target all night so there was no way back for them.

The only scare for City was when Ederson came out of his goals and clattered into young defender Garcia.

After lengthy treatment the academy starlet – who had an impressive night – was stretchered off meaning both sides ended with 10 men.