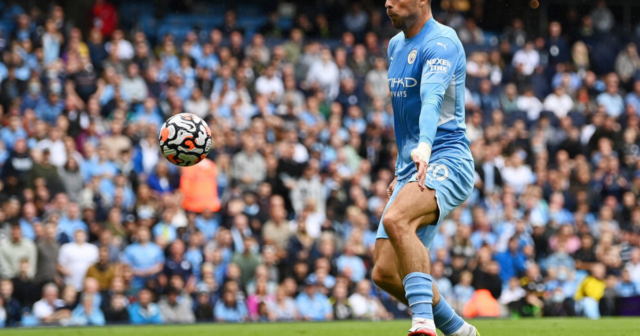 THE CHAMPIONS are up and running.

Norwich City were despatched with ease, and £100million man Jack Grealish enjoyed a home debut to remember as he got off the goalscoring mark for his new club.

The visiting Canaries may have travelled north some hope after Manchester City’s defeat to Spurs last week suggested Pep Guardiola’s men may be on for another slow start to the season.

Those hopes were extinguished before the half-hour mark.

It is no exaggeration to say Norwich barely got out their own half for 90 minutes.

The home side set up camp in the attacking third of the pitch from the off and were relentless.

There was an inevitability about this from the very first whistle.

Guardiola had made five changes to the side that lost 1-0 at Spurs and there was a freshness about the team that had been lacking the week before.

Gabriel Jesus is not the goalscorer Pep needs – he’s still at Tottenham – but he was the main threat in the first period from a position wide on the right, and was rightly named man of the match.

It is fair to say this was not an afternoon Canaries’ full-back Dimitris Giannoulis will remember fondly as he was run ragged.

The first goal came on seven minutes as Rodri found Jesus on the right, who drilled a cross into the area.

Norwich captain Grant Hanley intervened but only managed to deflect the ball off goalkeeper Tim Krul and in.

The second should have come in the 15th minute.

Milot Rashica caught his foot in the turf with Bernardo Silva in close attendance, and fell over.

Play seemed to stop with the visitors waiting for the referee’s whistle but it didn’t come, Jesus fed Ferran Torres and he slotted the ball home.

The Norwich players surrounded the ref, their manager Daniel Farke was raging on the touchline and VAR Jonathan Moss asked ref Graham Scott to have another look at it on the pitchside screen. 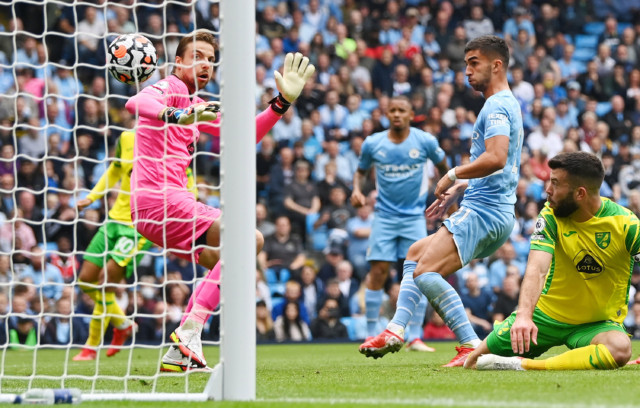 Tim Krul put City ahead with an early own goal

Even then the replays seemed to show he had just fallen over but Scott, possibly feeling under pressure from the VAR, reversed his decision.

Now it was the Man City players, fans and manager who were raging with Pep giving fourth official Peter Bankes a lengthy earful as he flapped his arms about.

What a thankless task it is being a fourth official, you literally don’t make a decision but get all the flak for every one the man in the middle makes.

‘What did you do today Dad?’, ‘Got shouted at by two middle-aged blokes for 90 minutes’.

There was no disputing the second when it did come although there was a little bit of good fortune about it.

Kyle Walker, excellent all game, had no defending to do so was happy to get involved high up the pitch and played a fabulous through ball for Jesus to drill over another cross.

The ball shot behind three Norwich players in retreat, hit Grealish on the inner thigh at the far post, and went over the line.

He didn’t know a lot about it, but he still loved the moment. 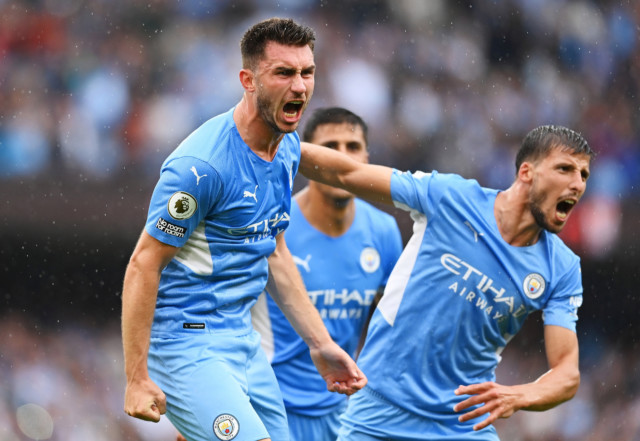 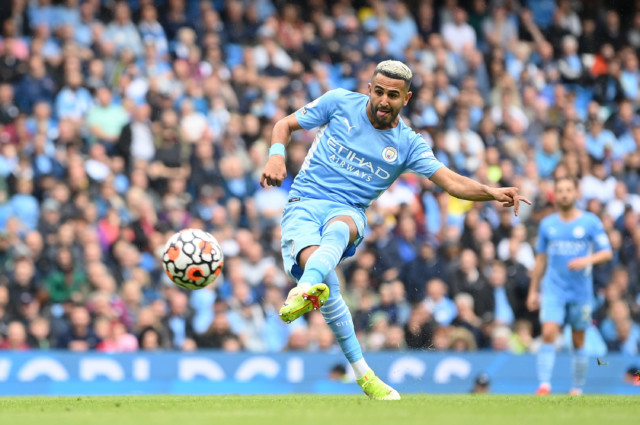 Riyad Mahrez came off the bench to round off the scoring

There was no let up in the second period as wave after wave of attacks bore down on the Norwich goal.

As it was, the third on 64 minutes was a bit of a scrappy affair.

Ilkay Gundogan’s corner was flicked on by Aymeric Laporte and Norwich were all at sea.

The ball bounced off Teemu Pukki – yes, he was playing – kneed back into Laporte’s path by Rashica and the Man City centre-back drilled it home through a crowd of players.

The fourth was a carbon copy of the second goal as Walker played another great ball down the right for Jesus to fire over a cross and sub Raheem Sterling, on for only ten minutes, turned it in.

The rout was complete on 84 minutes when Riyad Mahrez controlled Ruben Dias’ chipped through ball superbly with the outside of his left boot and fired low past Krul.

The newly-promoted Canaries were not done any favours by the fixture computer pitching them against the title winners of the last two seasons in their opening two games of the new season.

They were beaten 3-0 at Carrow Road last weekend by Liverpool and now this.

The closest they came to scoring was when Ilkay Gundogan almost turned the ball into his own net. 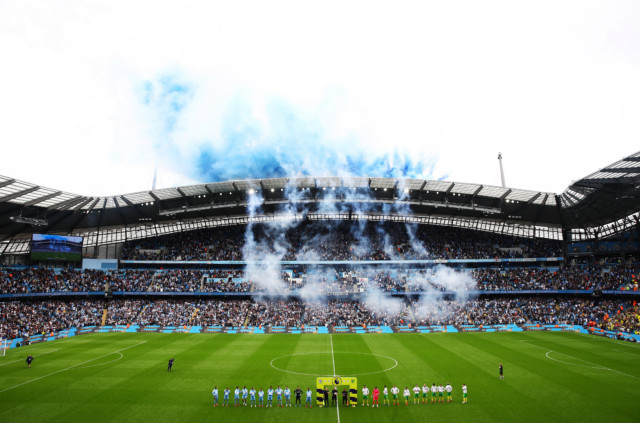 The Etihad welcomed fans’ return with a romp on Saturday 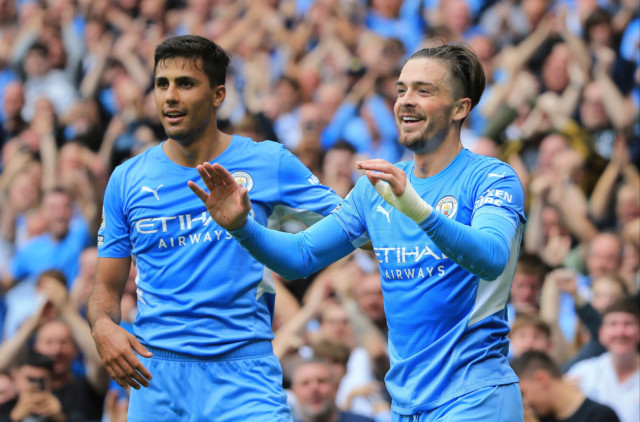 The Canaries have had five relegations in their last seven top-flight seasons and they will be battling all season to make sure that does not become six in eight.

For Man City, it’s a sixth title in 11 seasons they are searching for and they will be the ones to beat again, Harry Kane or no Harry Kane.