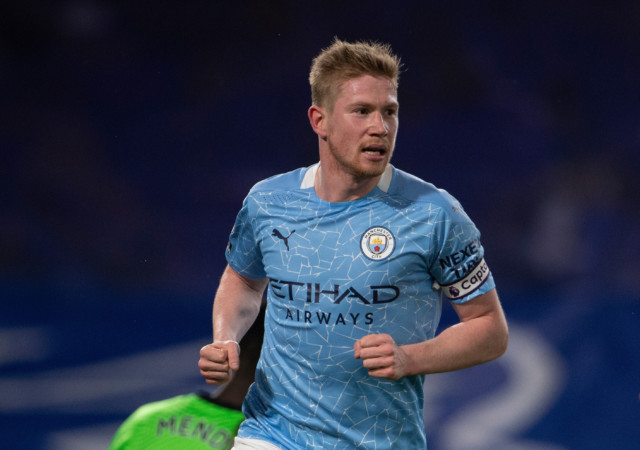 MANCHESTER CITY are still confident Kevin De Bruyne will sign a new Etihad deal — despite a hitch in negotiations.

Reports in Belgium say the £54million ace is likely to reject the first offer put in front of him by his club.

He does not feel it reflects his current standing at City or his outstanding service since he signed in summer 2015.

City know that De Bruyne has said publicly he wants to extend his stay with them and the club are keen for that to happen too.

The 29-year-old De Bruyne has his father and lawyers leading the negotiations and is said to be frustrated at the lack of progress.

But he did not let that show on the Stamford Bridge pitch as he turned in an outstanding show against his former club Chelsea on Sunday.

He scored one and created another as Pep Guardiola’s men put on their best performance of the season so far — beating Chelsea 3-1.

City are hitting their stride after a sluggish start to the campaign and are unbeaten in 11 in all competitions.

De Bruyne said: “I think at the beginning of the season we had many difficulties, many injuries and no pre-season.

“Mentally and physically, we weren’t ready for the new season. But I think over the last month we have recovered a few players and we raised our level.

“We have won a few matches and gone up a few places on the table.”

City now turn their attention to the domestic cups with a trip to Manchester United in the Carabao Cup semi-finals tomorrow.

De Bruyne said: “We still have another eight games in January in all competitions.

“It’s going to be tough but I think we are ready for the battle and that is what matters. Of course, this week it has been difficult for us with some injuries and some positive cases of Covid but it is what it is.

De Bruyne was asked to play as a false No 9 in west London and it worked to great effect against Frank Lampard’s men.

KDB added: “In the first ten minutes it was a bit bizarre because I was trying to find my position.

“But after that I tried to do my job, it was a different role for me.

“With all the attacking players we have out at the moment, I did the job the manager asked me to do. I think I did a good job overall.”