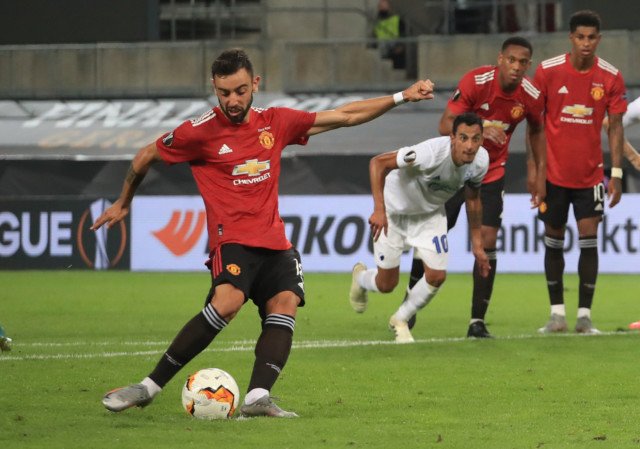 BRUNO FERNANDES made sure Manchester United came up smelling of roses in Cologne.

The Portuguese star has not missed a penalty in four-and-a-half years of top-flight football. 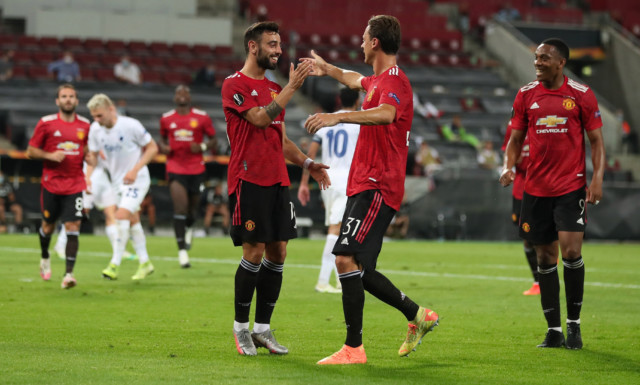 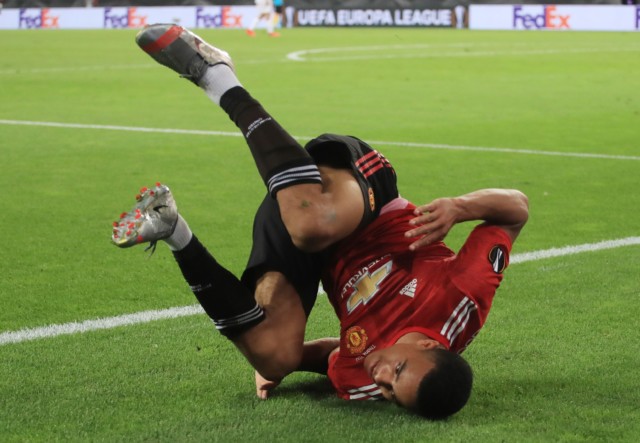 Last night he was the man on the spot again with the 95th-minute strike from 12 yards after Anthony Martial had been fouled by Andrea Bjelland.

The 12th penalty he has scored this season for both Sporting Lisbon and United.

It was United’s 21st penalty in all to be awarded this season and they now have no doubts about who is going to take them now after four had been missed before he arrived.

What a difference Fernandes has made since he came to Old Trafford in January. This was his 11th goal of the season but his influence has been much more than goals.

But it was certainly not plain  sailing last night.

Despite a really poor first half from United they were still left  cursing VAR for not being ahead at the break.

Twice they thought they had the breakthrough — but had a penalty and a goal from Mason Greenwood overturned by VAR.

It was the 24th minute when Victor Nelsson clattered into Anthony  Martial and the referee pointed to the spot. But it went to the video referee and it was ruled out with Harry Maguire and Paul Pogba both offside.

And Greenwood was sliding on his knees  after a superb finish right on half-time, which he thought had given his side the lead.

The United players celebrated, the bench celebrated but — as they walked back for the restart — the  referee put his finger to his earpiece.

Everyone looked a bit bemused but replays showed that Greenwood was half a yard offside when he latched on to Marcus Rashford’s flick header forward.

Still it was some shot across the goalkeeper and in off the far post. 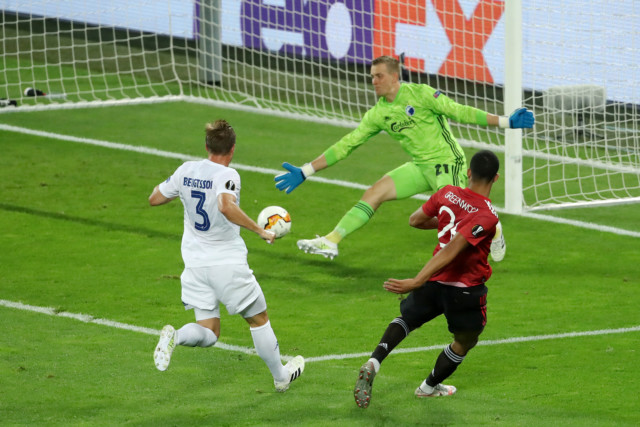 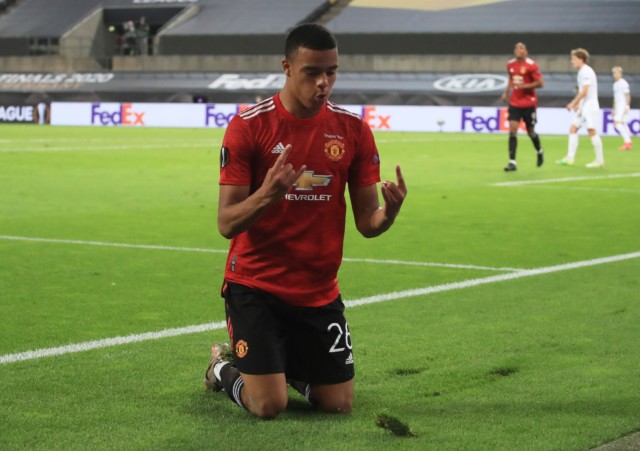 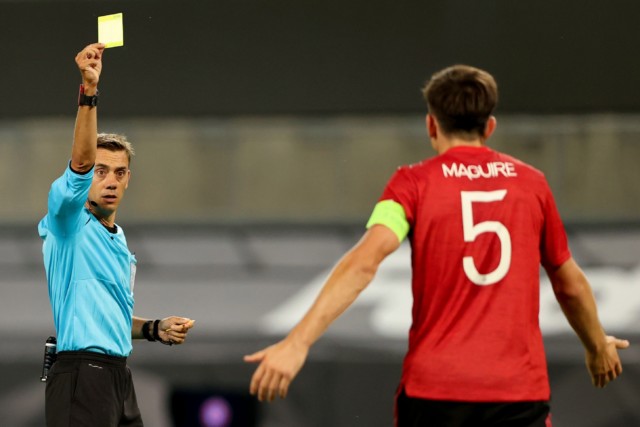 To be level at the break, however, was the least outsiders Copenhagen deserved.

Perhaps the United players had believed in their pre-match billing a little too much. Favourites for the tournament. The team to beat. Well they certainly did not look it and manager Ole Gunnar Solskjaer was fuming on the sidelines.

Copenhagen were squeezing the space at the back to stop United’s front three of Greenwood, Rashford and Martial.

At the other end United were  leaving space all over the place as Solskjaer pointed out in no uncertain terms.

A more experienced player could well have won Copenhagen a penalty after 14 minutes.

Eric Bailly dived in on 18-year-old Mohammed Daramy who, instead of going down, stayed on his feet and evaded the wild challenge.

His shot and the follow-up from Jens Stage were both blocked.

It was chaos at times at the back while at the opposite end through balls were being overhit.

The Danish underdogs knew this could be a huge night in their history and they wanted it. Certainly more  than Manchester United, it seemed.

Solskjaer’s men had come into  this Europa League “finals” mini- tournament in Germany on a run of one defeat in 23.

Still there had been signs of them  running out of steam with two home draws in their last two league games at Old Trafford  — and that 3-1 FA Cup semi-final loss to Chelsea.

They snuck into third, which meant they no longer had to win the Europa League to make the Champions League. 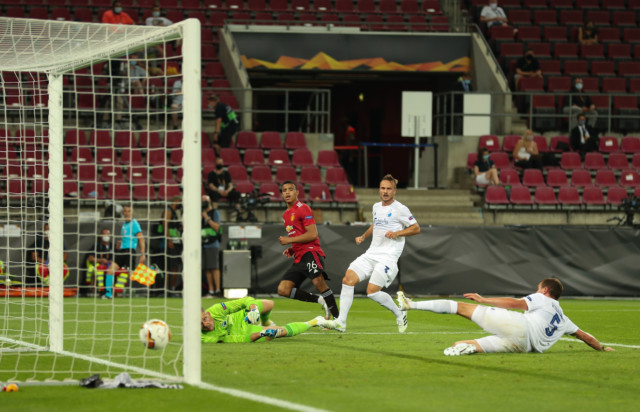 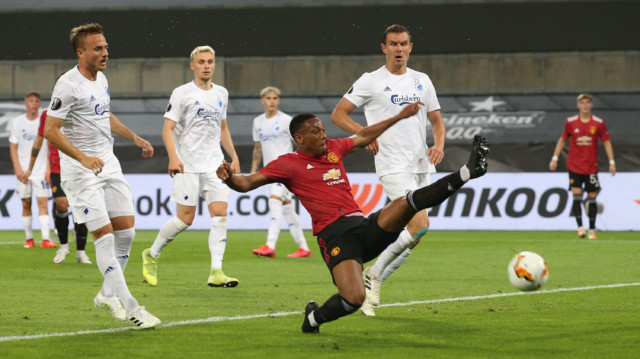 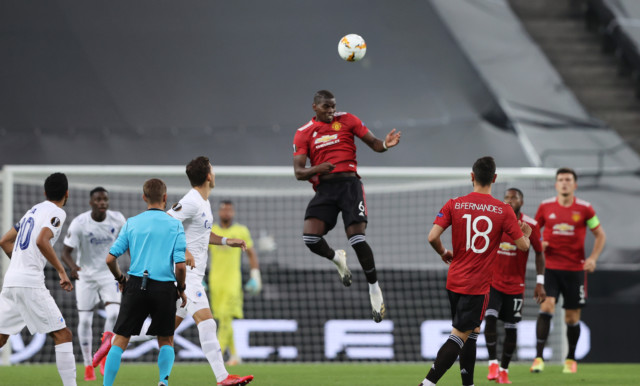 They could relax and maybe they did a little too much last night.

Greenwood was at least looking sharp and was so desperately close to claiming a goal again in the 56th minute. This time it was the post rather than VAR that denied him.

It was a slick burst of passing that gave him the chance with Rashford finding Brandon Williams who touched it off.

Greenwood was on to  it in a flash,  hitting a left-foot shot on the turn that crashed back off the inside of the post.

Rashford followed it up to score but was well offside and he knew it.

Fernandes had been quiet but when he found Rashford with a great looping through ball there was a chance.

Rashford took it first time on the volley with his instep but got no power on the shot and goalkeeper Karl-Johan Johnsson collected it with ease.

Fernandes was awake now and finding space — in the 62nd minute he struck a ferocious shot from 30 yards.

The goalkeeper was rooted to the spot but again the woodwork denied United with the ball coming back off the inside of the far post.

But Copenhagen had not lost the faith that they could cause an upset and came close in the 65th minute.

It was a great move as they worked the ball across the box for Bryan Oviedo to have a shot but Aaron Wan-Bissaka threw himself in its path to block.  Solskjaer was clearly not happy with what was going on defensively, so in the 70th minute made a double substitution.

On came Nemanja Matic for Fred in a defensive midfield position. And Bailly was hooked for Victor Lindelof.

The Copenhagen bench were up and screaming for a penalty in the 81st  minute for Williams’ challenge on  Guillermo Varela. United fans held their breath but neither the ref nor VAR saw an infringement.

Back at the other end and Martial had a sight of goal and hit a curling shot towards the far top corner but it was saved brilliantly by Johnsson. It would be the last chance of the 90 minutes.