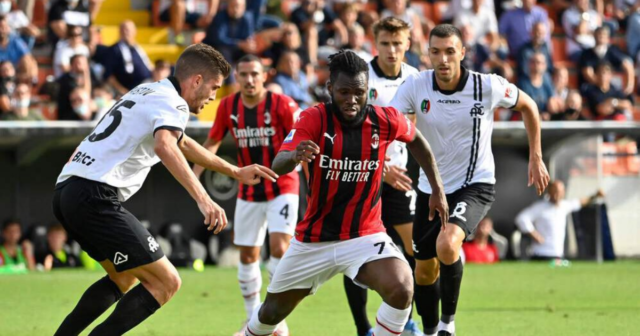 MANCHESTER UNITED are one of several Premier League teams keeping an eye on AC Milan star Franck Kessie, according to reports.

Liverpool, Chelsea, Arsenal, Tottenham and Everton are all said to be in the mix for the Ivorian following his strong form for the Italian club.

Franck Kessie is being tracked by multiple Premier League teams

Kessie, 24, is out of contract at the end of the season, his fifth at the San Siro.

English clubs will therefore be able to negotiate a pre-agreement for a summer free transfer as soon as January.

As reported by 90min, United and many Prem rivals have asked Kessie’s agent to be kept in the loop if the player decides to hear out offers.

Paris Saint-Germain and Bayern Munich are also named in the report but the midfielder is said to prefer a move to England, which is seen as a better fit for his playing style.

But Milan still have a couple of months to persuade him to stay.

Talks over a new contract are said to be at a standstill following Kessie’s rejection of a new deal.

That would then rise to £105,000-a-week in the final two years of the proposed five-year contract, according to Tuttosport.

However, Kessie is said to be seeking as much as £115,000-a-week as a starting salary, following his role in Milan’s resurgence over the past year.

A decision will reportedly be made by the former Atalanta star in January over whether he will stick with the Rossoneri or head for pastures new.

Should he choose to move on, Milan are described by Corriere dello Sport as increasingly confident that the emerging Sandro Tonali will step up as the key man in their midfield.