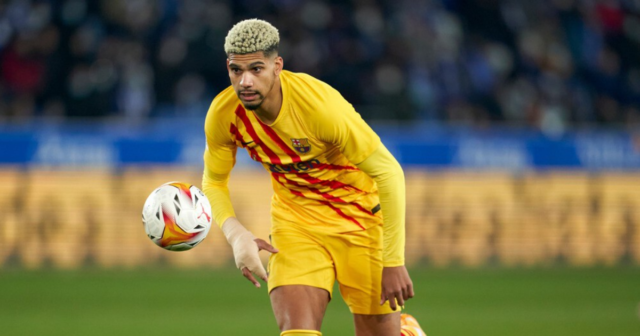 The centre-back is out of contract in the summer of 2023 and his imposing performances have landed him on the radar of some of Europe’s biggest clubs.

Araujo has forced his way into the Barca first-team

And according to Marca, Araujo is showing no signs of agreeing to new terms at Barca yet.

The 22-year-old has rejected the cash-strapped Spaniards’ contract offer, putting the likes of United and Chelsea on alert.

Araujo is reportedly aware of the financial lengths both clubs are willing to go to secure his signature.

Barca will, however, try again in the near future to tie the promising defender down to a long-term deal.

And Araujo is open to staying in Catalonia, but he wants a contract that adequately reflects ability and performances.

Keeping hold of Araujo is seen as a priority for Barca sporting director Mateu Alemany.

Alemany is one of the key architects hoping to rebuild Barca back as one of Europe’s super powers.

Barca have already signed Spain international Ferran Torres, 21, as part of the rebuild.

Torres was signed from Manchester City for £55million.

And the winger has already got off to a good start, picking up a goal and an assist in three games played.