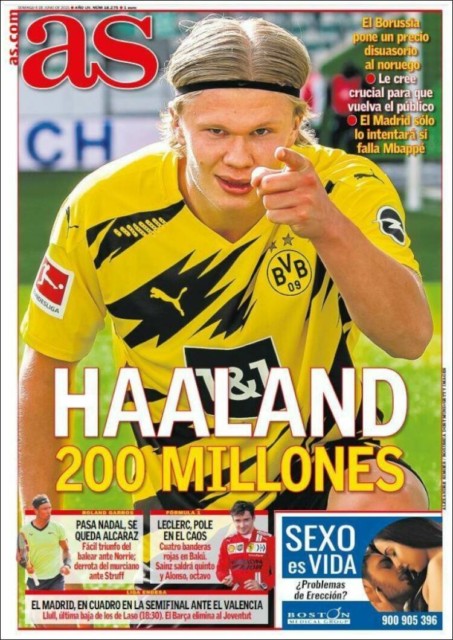 MANCHESTER UNITED, City and Chelsea have reportedly been dealt a major blow in their pursuits of Borussia Dortmund star Erling Haaland.

All three Premier League giants, as well as Real Madrid and Barcelona, have been heavily linked with the Norwegian ace.

But Dortmund are determined to keep the 20-year-old for another year.

According to AS, the German giants have slapped a £172million (€200m) price tag on their talismanic forward.

Should Haaland stay for the upcoming season, a release clause a little under £70m will activate next summer.

Man City could turn their immediate attention towards prising wantaway striker Harry Kane away from Tottenham.

While Man United relieved their need for a new No9 by re-signing Edinson Cavani for next season.

Chelsea would love a new centre forward, having also been linked with Romelu Lukaku.

But boss Thomas Tuchel, fresh from signing his new contract, is willing to persist with £53m flop Timo Werner next season

The German largely disappointed during his first year at Stamford Bridge.

Haaland, 20, is currently on international duty with Norway

But he did show flashes of quality and a willingness to work hard for the team.

Barcelona chiefs met with Alf-Inge Haaland and Mino Raiola back in April, but can’t afford Dortmund’s asking price amid their financial woes.