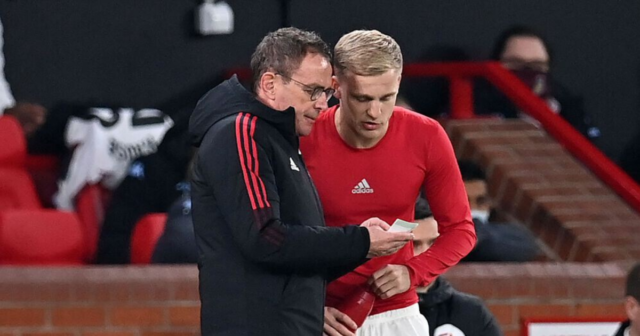 The Netherlands midfielder has been a total flop since joining from Ajax in August 2020.

He hardly had a look-in under previous boss Ole Gunnar Solskjaer and has played just seven minutes of football under new manager Ralf Rangnick.

Now reports claim the 24-year-old is pleading with the Old Trafford hierarchy to put him out of his Red Devils misery.

Crystal Palace are understood to be interested in taking him on loan until the end of the season.

But Van De Beek needs negotiations to move quickly or he risks being left high and dry once again when the transfer window closes on Monday.

He had pushed for a permanent move to Everton last summer, but United nixed the deal in a hint the player would form part of their plans for the coming season.

And club chiefs remain desperate to see their £39million signing come good in a red shirt.

Van De Beek though has lost his place in the Netherlands squad and is clamouring for game-time in a bid to make this year’s Qatar World Cup.

Transfer guru Fabrizio Romano has reported both Palace and Valencia have asked to take the playmaker on loan for the remainder of the season.

Despite having hardly picked him, Rangnick is reportedly ‘reluctant’ to let Van de Beek go this month.

However Palace will ‘push’ to get a deal over the line – and Van de Beek is just eager to play.

Did you miss our previous article…
https://www.sportingexcitement.com/football/premier-league/marco-silva-says-it-has-been-difficult-to-tempt-fabio-carvalho-to-sign-new-fulham-contract-amid-liverpool-interest