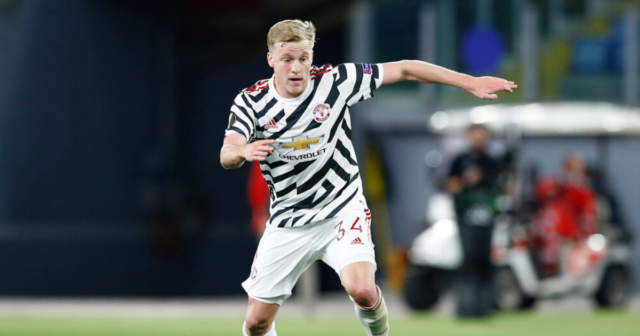 MANCHESTER UNITED flop Donny van de Beek wants to stay at Old Trafford and fight for his place, according to reports.

The 24-year-old has struggled since joining the club in August 2020, making just 19 Premier League appearances.

According to the Manchester Evening News, van de Beek will snub interest from Spain, Italy and Germany to keep his United dream alive.

The Holland international has been linked with a move abroad this summer after a difficult first season in England.

Most of van de Beek’s United appearances to date have been off the bench as he’s failed to nail down a place in Ole Gunnar Solskjaer’s team.

Barcelona, Real Madrid, Roma and Juventus have all been linked with the midfielder in recent months.

And reports suggest United will listen to offers for van de Beek this transfer window as they look to improve their squad.

But he is said to be ‘fit, fresh and ready for the challenge’ at Old Trafford after missing Euro 2020 through injury.

Van der Vaart said in June: “If nobody leaves United during the summer, he is going to need to get lucky to break into their starting eleven.

“He is much too good to remain sat on the bench for two seasons… Donny was a perfect fit for Ajax’s system, but he does not fit in at United.”

While van Basten said in May: “In a team like Ajax you are really helped, especially in the No10 position.

“Then you often see that they go abroad and it is a different story.”

Reports suggest United are on the hunt for a new midfielder this summer, with German star Leon Goretzka thought to be in their sights.

The Red Devils have also been linked with Wolves talent Ruben Neves, although they face competition from Arsenal for the £35m-rated player.

And they are said to be keen on French youngster Eduardo Camavinga, with Rennes president Nicolas Holveck refusing to rule out his departure.