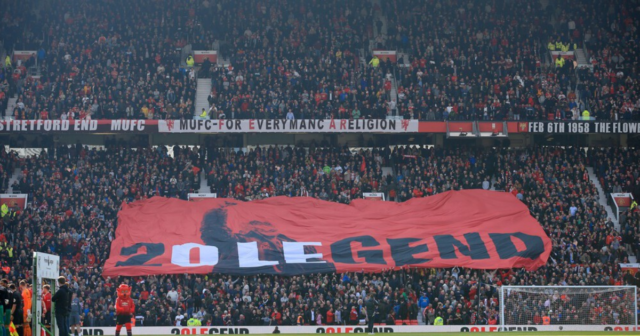 MANCHESTER UNITED have given fans permission to hold up an Ole Gunnar Solskjaer banner at their match against Arsenal on Thursday.

Supporters are said to have approached the club about the touching gesture and Old Trafford chiefs have approved.

The enormous banner will be held aloft in the Stretford End, according to ESPN.

And it is also their first game since Ralf Rangnick was confirmed as temporary boss.

Solskjaer, 48, was relieved of his duties after the Red Devils’ 4-1 defeat at Watford.

He had been in charge three years and led the side to second in the Premier League and the Europa League final.

United confirmed Michael Carrick will once again lead out the team on Thursday while Rangnick’s visa is finalised.

The 63-year-old German will also have to have a PCR test in line with new Government regulations.

Despite his recent sacking, Solskjaer is still held in the highest regard among most United fans.

And in that time he won a staggering six Premier League titles.

He also scored the iconic goal which clinched the 1999 Champions League and the Treble in the dramatic final against Bayern Munich.

Did you miss our previous article…
https://www.sportingexcitement.com/football/premier-league/man-city-star-ferran-torres-reaches-barcelona-agreement-as-clubs-negotiate-over-transfer-fee-with-guardiolas-blessing