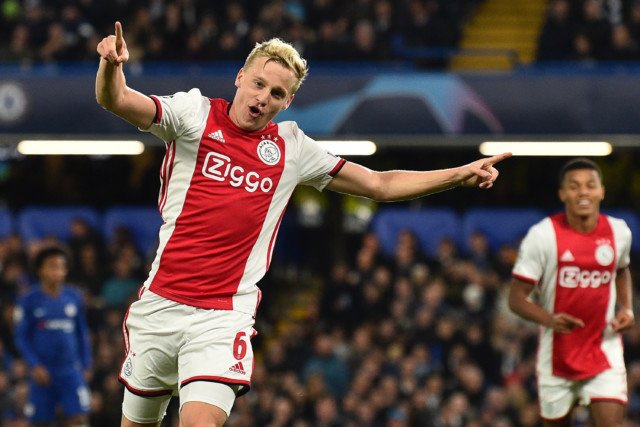 MANCHESTER UNITED’S path to sign Donny van de Beek has reportedly cleared, with Real Madrid “backtracking” on their move to sign the Dutchman.

The LaLiga giants had agreed a £44.5million fee for the 23-year-old earlier this year, with personal terms also having been sewn up.

But with the mounting costs involved as they renovate the Bernabeu, coupled with the coronavirus pandemic, the chances of Los Blancos completing the deal are now “nil”.

And this could swing the door back open for the Red Devils.

“The transfer fee was fixed. He was allowed to go for €50million. In fact, everything was agreed. It was only about the medical examination.”

Amid the disappointment of missing out on his dream move, van de Beek could look elsewhere – with Dutch legend and Ajax coach Ronald de Boer admitting that he would “understand” if he now decided to join United.

He told FOX Sports: “When you hear these clubs go by, I know your heart beats faster. Maybe this train won’t pass by him anymore.

“If Real Madrid again decide not to push for Donny, then I can understand it if he decides to go to Manchester United instead.

“On the one hand, I understand that Real Madrid are hesitating a bit.

“Another club could think, ‘Hey, an interesting player, maybe we can get him for a little less’.

Los Blancos have reportedly rated the 23-year-old at £44.5million ahead of the summer transfer window – whereas the Red Devils could bid as little as £36m.

Van de Beek has scored eight goals and laid on a further eight assists in the Eredivisie this season, and Ajax CEO Edwin van der Sar has admitted that his old club are interested in the midfielder.

And there is more than enough space for van de Beek in the United dressing room, according to de Boer, who believes Ole Gunnar Solskjaer could replace Paul Pogba with the Ajax ace.

He added: “Solskjaer has indicated that he wants to go in a new direction and wants players who are humble, whose heart is with the club, a team player.

“I think he is tired of the Pogbas running around. He wants players like Donny van de Beek.”