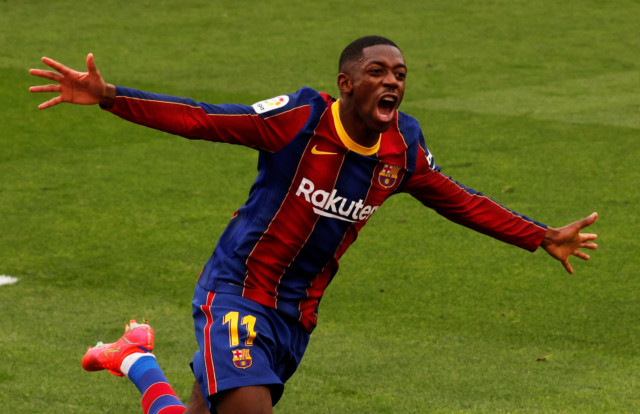 MANCHESTER UNITED are in ‘regular contact’ with Ousmane Dembele’s agent, according to reports.

But they may face stiff competition for the 23-year-old should they attempt to sign him, with Liverpool also rumoured to be interested.

Several top European clubs are believed to be interested in signing Dembele, 23

According to Spanish newspaper Mundo Deportivo, United have been monitoring the player for some time and tried to sign him on loan last summer.

Dembele is out of contract at the end of next season but could yet sign a new deal at Barcelona.

The Red Devils are believed to be in regular contact with the player’s agent, with Edinson Cavani likely to leave Old Trafford at the end of this season.

But they may have to beat Juventus to his signature, should they decide to pursue him.

United and the Italian champions are rumoured to be the two teams most interested in Dembele.

But other clubs have been linked with the Barcelona star, including Paris Saint-Germain and Liverpool.

As he stars in a front three alongside Lionel Messi and Antoine Griezmann, Dembele would suit Jurgen Klopp’s style of play and could be a long-term successor for Mohamed Salah, who continues to be linked with a move.

The Liverpool hierachy may also be concerned with the age of their fabulous front three as Salah and Sadio Mane both turn 29 this year and Roberto Firmino celebrates his 30th birthday in October.

Dembele has been in good form this season, scoring nine goals in all competitions to show why Barcelona paid more than £100million for him in 2017.

The France international has suffered with injuries throughout his time at the Nou Camp, making just 51 LaLiga appearances in three years before the start of the current campaign.

Did you miss our previous article…
https://www.sportingexcitement.com/football/premier-league/rashford-could-miss-man-utds-granada-clash-eric-bailly-tests-positive-for-covid-19-haaland-latest-transfer-news