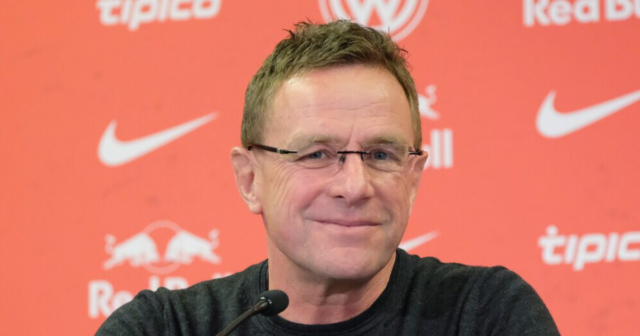 The 63-year-old German agreed a six-month deal with the Red Devils on Thursday as he became their interim boss until the end of the season.

But Rangnick could have arrived in England five years earlier had the FA opted to appoint him as head coach of the Three Lions instead of Allardyce.

Talking to FourFourTwo in 2017, Rangnick discussed the conversations he had with FA technical director Dan Ashworth.

He said: “Dan first contacted me in 2012 and invited me to an interview at West Brom. He offered me the job but I knew he was probably going to join the FA, so I turned it down.

“After the Euros he called me again and asked if I would come for an interview for the England job. I said, ‘How realistic is that?’

“He said that if it was up to him it would be very realistic, but that there were some other people on the board who’d also have a say, and a few of them thought it should be an Englishman.

“Of course, that’s normal. Three days after I went for the interview, they informed me that Sam Allardyce would be taking over as manager.”

It ended up being a dreadful decision by the FA as they passed up the chance to bring in Rangnick’s highly-rated, modern approach.

Instead, they hired Allardyce and chaos ensued as he was sacked after just one game at the helm.

The former Bolton and West Ham boss left the role by mutual consent on September 27, just 67 days after getting the job.

He was replaced by Gareth Southgate, who would go on to reach the semi-finals of the 2018 World Cup and final of Euro 2020.

Southgate recently signed a contract extension to keep him in the national team role until 2024.

Meanwhile, Rangnick is currently awaiting a work permit as he prepares to take charge of Man Utd.

The German will not be in the dugout for United’s visit to Stamford Bridge on Sunday when they face Premier League leaders Chelsea.

But he could well be in place for the Red Devils’ match against Arsenal at Old Trafford on Thursday, December 2.