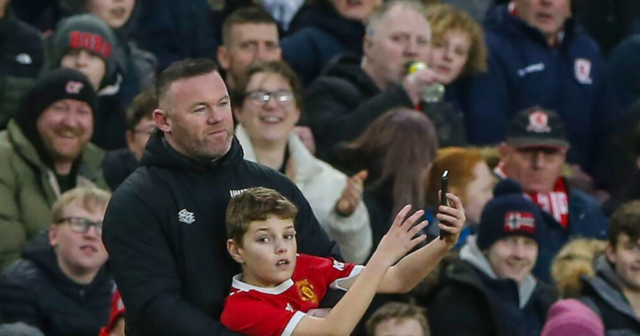 WAYNE ROONEY posed for a selfie with a young pitch invader after the plucky fan dodged stewards to sprint halfway up the pitch.

The Derby manager, 36, took charge of his side away at Middlesbrough on Saturday.

“You’ve only come to see the Rooney” pic.twitter.com/3zcLMKuS5M

And with his side 3-1 down in the 84th minute, Wazza was suddenly joined in the dugout by the kid wearing a Manchester United home shirt.

The lad then leaned up against his hero Rooney with his phone in hand to grab the priceless photo.

The United and England record goalscorer put his arm around the youngster, almost shielding him from security personnel.

And once he had got the snap, Rooney twizzled him around away from the approaching fourth official.

The cheeky supporter then darted back down the touchline at the Riverside, cutting across the corner of the pitch then hopping the advertising boardings to get back to his seat.

Rooney’s smile was soon wiped off his face, though, when substitute Duncan Watmore added Boro’s fourth.

The result means the East Midlands side – who have been docked 21 points for FFP breaches – remain four points from safety in the Championship.

Rooney had no qualms with the child’s antics – and admitted he would have done the same.

The Rams chief said: “He has took a chance.

“Fair play to the kid, it is probably something I’d have done myself!

“It is not really my concern.

“No, I won’t complain about it. I am sure Middlesbrough will look at it.”

Did you miss our previous article…
https://www.sportingexcitement.com/football/premier-league/tottenham-fans-defy-club-orders-by-singing-y-word-in-first-minute-of-wolves-tie-despite-spurs-chiefs-urging-them-to-stop

Advertisement. Scroll to continue reading.
In this article:manchester united, middlesbrough