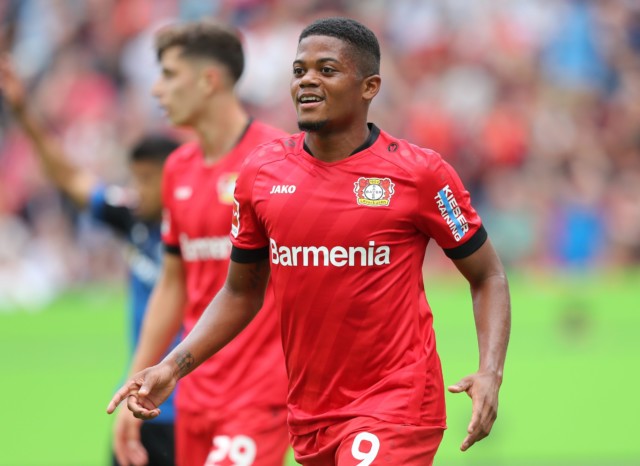 MANCHESTER UNITED are eyeing up a move for Leon Bailey as a cheaper alternative to £100million-rated Jadon Sancho and Jack Grealish.

The rapid Bayer Leverkusen star, 22, is the latest winger to enter Ole Gunnar Solskjaer’s radar ahead of a potential summer swoop.

Young English stars, such as Sancho and Grealish, always command a high fee in the Premier League, with clubs hit with something of a premium.

With many clubs hit hard financially by the coronavirus lockdown, they are turning elsewhere to bolster their squads.

And Man Utd are no different, with reports claiming they’re willing to turn their back on Sancho and Grealish and look to the Bundesliga.

Bayer Leverkusen are already set to be left reeling this summer with a hoard of clubs fighting tooth and nail to sign Kai Havertz.

But they could also lose star winger Bailey too, with United itching to add some natural wide players to their squad this summer.

Aside from Daniel James, Solskjaer is desperately short on the flanks, with natural centre-forwards such as Marcus Rashford and Anthony Martial often deployed out wide.

Bailey could cost Man Utd as little as £40m, despite having three years left on his current contract.

That figure is under half that of Borussia Dortmund star Sancho or Aston Villa’s Grealish.

However, United could also face competition from rivals Manchester City, who see Bailey as a natural replacement for Leroy Sane – who’s tipped to join Bayern Munich.

Predominantly a left-footed right winger, Bailey is competent on the left flank or even deployed as a striker, comfortable playing with both feet and blessed with lightning pace.

As well as his natural talent, his Champions League experience is a bonus to Man Utd.

And Solskjaer is hoping to land a number of new players this summer in a bid to help his squad become a force again.

Reports claim he would rather spread his transfer budget across a handful of stars rather than blow it on one big name, like Sancho.