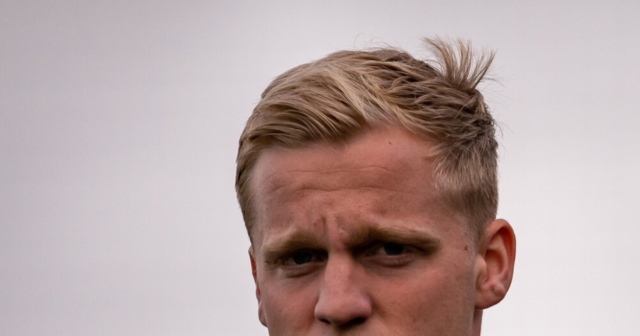 DONNY VAN DE BEEK will try and force a January transfer away from Manchester United following his Villarreal meltdown, according to reports.

The Dutchman, 24, has failed to make an impact at Old Trafford since his £40million switch from Ajax last year.

And according to the Daily Mail, he is ready to make sure he gets out of the club when the market reopens in the New Year – with his morale worsened by events at Old Trafford on Wednesday night.

Van de Beek furiously hurled his chewing gum to the ground in the dugout when manager Ole Gunnar Solskjaer overlooked him when pushing for a winner against the Europa League champions.

Instead, the Norwegian sent on Fred and Jesse Lingard – with both players involved in Cristiano Ronaldo’s dramatic 95th-minute winner.

Eric Bailly and Dean Henderson tried their best to console the United outcast but to little success.

Van de Beek made just four Premier League starts last season but, with talk of a move away, was reassured by Solskjaer over the summer he was wanted and encouraged to fight for his place.

Everton attempted a last-ditch swoop to take him on loan but United blocked a deal – instead promising him more game time.

But in the 2020-21 season, he has made just appearances, including six minutes in the league.

Van de Beek, who could return to boyhood club Ajax, was dragged off at half-time against Young Boys and his only full 90 minutes ended with a 1-0 Carabao Cup exit to West Ham.

Earlier this month, the 19-cap Netherlands international spoke to Rio Ferdinand on his YouTube channel about his own future and admitted he did not expect Ole to guarantee him a place.

But he also said: “I have asked to play more. You can train hard every day, but in the end, you need game time.

“If you only play once a month, you cannot show your best form – playing is really important.”