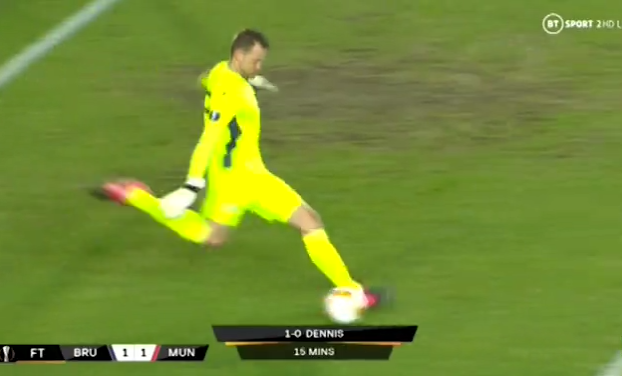 The Red Devils conceded in calamitous circumstances as striker Emmanuel Dennis was left to run through on goal straight from a goal-kick and lobbed on-rushing Sergio Romero.

As the Nigerian ran away to celebrate, United players were calling for a VAR review after spotting that the ball was still moving when Brugge keeper Simon Mignolet kicked it.

However, their pleas fell on deaf ears as it is AGAINST protocol to check restarts.

Ifab’s rulebook states: “The Laws of the Game do not allow restart decisions (corner kicks, throw-ins etc.) to be changed once play has restarted, so they cannot be reviewed.”

And that explanation did not wash with United fans, with one Tweeting: “I’ve officially heard it all.”

Another baffled supporter, StattRoberts, questioned: “What’s the point of VAR if they’re not going to check whether the ball was moving, which it clearly was, from the goal kick that led directly to a goal.”

While Danny asked: “If it sets up a goal how on Earth cant you look at it?”

VAR couldnt look if the ball was moving for their goal?

VAR cant get involved in restarts, so even though the ball was moving its up to the referees and officials officially heard it all

Why wasnt var used to see if united had a corner or to see if the ball was moving when it was kicked from a goal kick?

What's the point of VAR if they're not going to check whether the ball was moving, which it clearly was, from the goal kick that led directly to a goal

Nemanja Matic also wanted a corner before the goal-kick was awarded.

But ex-United midfielder Owen Hargreaves had not sympathy – and slammed Romero’s role in the goal.

Speaking on BT Sport he said: “[The] first goal, Matic tries to get a corner and doesnt get it. One quick long ball, the pitch is wet, Romero cant come off his line there, United were disorganised and paid the price.

“I dont know why they didnt use VAR to review the tackle on Matic near the corner but the mistake is clear and obvious from Uniteds defence.

“Romero is too far off his line, if he stays on his line maybe Brugge dont score.”
Fortunately for United – and red-faced Romero – Anthony Martial levelled before the break as Ole Gunnar Solskjaer’s side put one foot in the last-16 with a 1-1 draw.