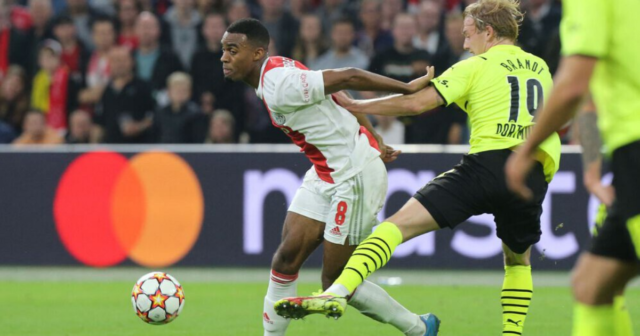 MANCHESTER UNITED are interested in signing Ajax wonderkid Ryan Gravenberch, according to reports.

But the Red Devils will have to deal with tricky super-agent Mino Raiola to do so.

Raiola, 53, represents Paul Pogba – and has caused the Red Devils issues with his past comments.

The Mirror report that undeterred, United are still set to go head to head with rivals Liverpool for midfielder Gravenberch’s signature.

Already a Dutch international at 19, the midfielder could be the answer to the Red Devils’ issues in the centre of the park.

While Liverpool opted not to sign a replacement for Gini Wijnaldum over the summer, only for their own wonderkid Harvey Elliott to be struck down by a serious injury.

But Ajax haven’t given up on sealing an extension.

And the player’s father believes that he would be best served completing his development in Amsterdam.

He said: “He has to take that last step at Ajax. He just has to and he hasn’t done that yet.

“I want him to fully mature at Ajax, so as far as I’m concerned he will just stay at Ajax.

“He has only played one full season now and that was of course quite good, but next season he will have to play even better.

“Then, despite his age, he really must be one of the key players, especially if he plays in the European Championship [with the Netherlands].

“Next season, he will not get away with it in the dressing room if he plays poorly several games in a row.

“I really think he should take a step at Ajax first. He has to climb in the hierarchy and stand up more for himself within the squad.

“I’m not going to push him to do that, that makes no sense to Ryan. But he also realises that. He also thinks it is best for him to stay at Ajax.”