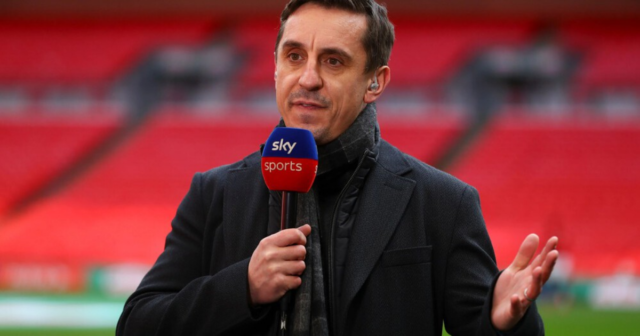 GARY NEVILLE has blasted lazy Manchester United for failing to put in the hard yards during their humiliation by Liverpool.

The former United skipper fumed as he watched his old team smashed 5-0 by their fierce rivals in Sunday’s Premier League blockbuster.

And the Sky Sports pundit lashed out at the Red Devils’ lack of effort and gameplan as the visitors ran amok at Old Trafford.

Neville said: “That Manchester United team are one of the lowest-running teams in the league, we see that in the stats.

“And there’s nothing worse than being told you are one of the lowest-running teams and that you are easy to play against.

“But they are both. That is a poor reflection on the manager, the staff and the players.”

United were completely outplayed on one of their darkest nights at The Theatre of Dreams as the visiting Reds notched four goals even before half-time.

Pundits have been queuing up to slam boss Ole Gunnar Solskjaer’s tactics and the lack of commitment from his players.

And Neville agreed with his old team-mate, saying the way United organised themselves in defence was a recipe for disaster.

He said: “In the first half, they were a mixture of sitting back in their shape and trying to be behind the ball and the next you see a mad little jog, not a sprint by the way, by Greenwood towards Van Dijk.

“Then you see (Aaron) Wan-Bissaka ambling towards (Andy) Robertson. He gets passed behind to (Diogo) Jota and (Victor) Lindelof is trying to get across. And it is all too late.

“It is a pattern, and it is inherent in them. They have no structure to press from, along with the fact they don’t run against the other teams and are easy to play against.”

Did you miss our previous article…
https://www.sportingexcitement.com/football/premier-league/chelsea-star-timo-werner-looks-disgusted-after-being-handed-orange-wine-gum-in-norwich-match-leaving-fans-in-hysterics